The Love Affairs of a Bibliomaniac 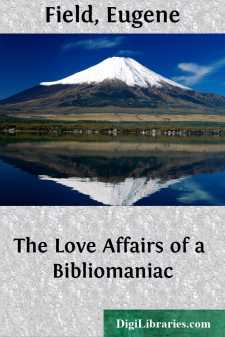 The determination to found a story or a series of sketches on the delights, adventures, and misadventures connected with bibliomania did not come impulsively to my brother. For many years, in short during the greater part of nearly a quarter of a century of journalistic work, he had celebrated in prose and verse, and always in his happiest and most delightful vein, the pleasures of book-hunting. Himself an indefatigable collector of books, the possessor of a library as valuable as it was interesting, a library containing volumes obtained only at the cost of great personal sacrifice, he was in the most active sympathy with the disease called bibliomania, and knew, as few comparatively poor men have known, the half-pathetic, half-humorous side of that incurable mental infirmity.

The newspaper column, to which he contributed almost daily for twelve years, comprehended many sly digs and gentle scoffings at those of his unhappy fellow citizens who became notorious, through his instrumentality, in their devotion to old book-shelves and auction sales. And all the time none was more assiduous than this same good-natured cynic in running down a musty prize, no matter what its cost or what the attending difficulties. "I save others, myself I cannot save," was his humorous cry.

In his published writings are many evidences of my brother's appreciation of what he has somewhere characterized the "soothing affliction of bibliomania." Nothing of book-hunting love has been more happily expressed than "The Bibliomaniac's Prayer," in which the troubled petitioner fervently asserts:

"But if, O Lord, it pleaseth TheeTo keep me in temptation's way,I humbly ask that I may beMost notably beset to-day;Let my temptation be a book,Which I shall purchase, hold and keep,Whereon, when other men shall look,They'll wail to know I got it cheap."

And again, in "The Bibliomaniac's Bride," nothing breathes better the spirit of the incurable patient than this:

"Prose for me when I wished for prose,Verse when to verse inclined,—Forever bringing sweet reposeTo body, heart and mind.Oh, I should bind this priceless prizeIn bindings full and fine,And keep her where no human eyesShould see her charms, but mine!"

In "Dear Old London" the poet wailed that "a splendid Horace cheap for cash" laughed at his poverty, and in "Dibdin's Ghost" he revelled in the delights that await the bibliomaniac in the future state, where there is no admission to the women folk who, "wanting victuals, make a fuss if we buy books instead"; while in "Flail, Trask and Bisland" is the very essence of bibliomania, the unquenchable thirst for possession. And yet, despite these self-accusations, bibliophily rather than bibliomania would be the word to characterize his conscientious purpose. If he purchased quaint and rare books it was to own them to the full extent, inwardly as well as outwardly. The mania for books kept him continually buying; the love of books supervened to make them a part of himself and his life.

Toward the close of August of the present year my brother wrote the first chapter of "The Love Affairs of a Bibliomaniac." At that time he was in an exhausted physical condition and apparently unfit for any protracted literary labor. But the prospect of gratifying a long-cherished ambition, the delight of beginning the story he had planned so hopefully, seemed to give him new strength, and he threw himself into the work with an enthusiasm that was, alas, misleading to those who had noted fearfully his declining vigor of body. For years no literary occupation had seemed to give him equal pleasure, and in the discussion of the progress of his writing from day to day his eye would brighten, all of his old animation would return, and everything would betray the lively interest he felt in the creature of his imagination in whom he was living over the delights of the book-hunter's chase....