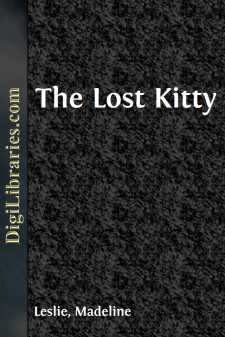 O Hatty! see that pretty kitty! I wonder where she came from.”

Fred Carleton walked softly toward the puss, his hand outstretched, calling, “Kitty, pretty kitty,” until he had her in his arms.

His sister Hatty took her hands from the dish-water, wiped them on the roller, and came toward him.

“I wish they wouldn’t mind,” said Fred, caressing the puss; “see how she loves me! I’d like to keep her so much.”

“But would you have Ned, who is a roguish boy, catch one of your bantams and keep it? You’d call that stealing.”

Fred sighed. “But I didn’t go to catch her, Hatty; she came right into the door. I think that’s different.”

“Perhaps she is hungry.”

“O Hatty! may I try her with some milk?”

“Yes,” she answered, laughing at his eagerness. “Pour some into a saucer from the pitcher in the closet, and see whether she will drink it.”

He was rewarded by the sight of pussy lapping up the milk.

“I do believe kitty is thanking me,” he said, laughing and clapping his hands. “See how she keeps looking up! I never saw a kitty do so before.”

Puss did, indeed, seem to be grateful. She lapped away at the milk with great eagerness, and then she would look in the face of her benefactor, and utter a soft little mew.

“Frederick,” called out Mrs. Carleton from the head of the stairs, “isn’t it time for you to go to school?”

“What a pretty puss!” his mother exclaimed; “where did you find her?”

Fred, standing very erect and firm, told all the circumstances relating to his new friend, and then asked,—

“What shall I do with her?”

“But it’s a long walk, and it’s awful muddy, ma. Couldn’t I let her stay here, and tell Ned at Sabbath school?”

“Is that the way you would like Ned to do, if the kitty were yours? Perhaps he is looking everywhere for her now, and mourning because his pet is lost.”

Frederick sat for a moment stroking the cat’s soft fur; then he started up, exclaiming, “I’ll go right off. I don’t care if it is muddy. I know Ned will be so glad.”

It was indeed quite a task for a child of only eight years to carry a half-grown cat over a muddy road for a third of a mile. But Fred anticipated, with delight, the pleasure he should give, and the thanks he would receive. Once kitty, not liking to be held so tightly, escaped from his arms, and led him a chase over the wall into a marshy field; but he caught her again at last, and laughed alone by himself, imagining how Ned and Clara would run to meet him as soon as they saw what he was carrying.

Hatty had finished washing the dishes, and had swept the dining-room and kitchen, when, happening to look from the window, she saw Fred coming back....