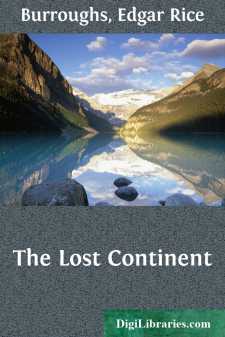 Since earliest childhood I have been strangely fascinated by the mystery surrounding the history of the last days of twentieth century Europe. My interest is keenest, perhaps, not so much in relation to known facts as to speculation upon the unknowable of the two centuries that have rolled by since human intercourse between the Western and Eastern Hemispheres ceased—the mystery of Europe's state following the termination of the Great War—provided, of course, that the war had been terminated.

From out of the meagerness of our censored histories we learned that for fifteen years after the cessation of diplomatic relations between the United States of North America and the belligerent nations of the Old World, news of more or less doubtful authenticity filtered, from time to time, into the Western Hemisphere from the Eastern.

Then came the fruition of that historic propaganda which is best described by its own slogan: "The East for the East—the West for the West," and all further intercourse was stopped by statute.

Even prior to this, transoceanic commerce had practically ceased, owing to the perils and hazards of the mine-strewn waters of both the Atlantic and Pacific Oceans. Just when submarine activities ended we do not know but the last vessel of this type sighted by a Pan-American merchantman was the huge Q 138, which discharged twenty-nine torpedoes at a Brazilian tank steamer off the Bermudas in the fall of 1972. A heavy sea and the excellent seamanship of the master of the Brazilian permitted the Pan-American to escape and report this last of a long series of outrages upon our commerce. God alone knows how many hundreds of our ancient ships fell prey to the roving steel sharks of blood-frenzied Europe. Countless were the vessels and men that passed over our eastern and western horizons never to return; but whether they met their fates before the belching tubes of submarines or among the aimlessly drifting mine fields, no man lived to tell.

And then came the great Pan-American Federation which linked the Western Hemisphere from pole to pole under a single flag, which joined the navies of the New World into the mightiest fighting force that ever sailed the seven seas—the greatest argument for peace the world had ever known.

Beyond was the great unknown. Even the geographies of my boyhood showed nothing beyond. We were taught of nothing beyond. Speculation was discouraged. For two hundred years the Eastern Hemisphere had been wiped from the maps and histories of Pan-America. Its mention in fiction, even, was forbidden.

Our ships of peace patrol thirty and one hundred seventy-five. What ships from beyond they have warned only the secret archives of government show; but, a naval officer myself, I have gathered from the traditions of the service that it has been fully two hundred years since smoke or sail has been sighted east of 30d or west of 175d....