The Lost Ambassador The Search For The Missing Delora 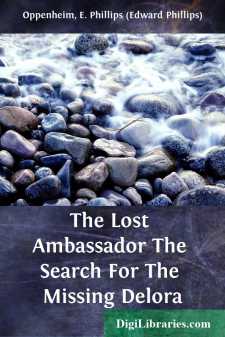 CHAPTER I A RENCONTRE

There was no particular reason why, after having left the Opera House, I should have retraced my steps and taken my place once more amongst the throng of people who stood about in the entresol, exchanging greetings and waiting for their carriages. A backward glance as I had been about to turn into the Place de l'Opera had arrested my somewhat hurried departure. The night was young, and where else was such a sight to be seen? Besides, was it not amongst some such throng as this that the end of my search might come?

I took up my place just inside, close to one of the pillars, and, with an unlit cigarette still in my mouth, watched the flying chausseurs, the medley of vehicles outside, the soft flow of women in their white opera cloaks and jewels, who with their escorts came streaming down the stairs and out of the great building, to enter the waiting carriages and motor-cars drawn up in the privileged space within the enclosure, or stretching right down into the Boulevard. I stood there, watching them drive off one by one. I was borne a little nearer to the door by the rush of people, and I was able, in most cases, to hear the directions of the men as they followed their womankind into the waiting vehicles. In nearly every case their destination was one of the famous restaurants. Music begets hunger in most capitals, and the cafés of Paris are never so full as after a great night at the Opera. To-night there had been a wonderful performance. The flow of people down the stairs seemed interminable. Young women and old,—sleepy-looking beauties of the Southern type, whose dark eyes seemed half closed with a languor partly passionate, partly of pride; women of the truer French type,—brilliant, smiling, vivacious, mostly pale, seldom good-looking, always attractive. A few Germans, a fair sprinkling of Englishwomen, and a larger proportion still of Americans, whose women were the best dressed of the whole company. I was not sorry that I had returned. It was worth watching, this endless stream of varying types.

Towards the end there came out two people who were becoming almost familiar figures to me. The man was one of those whose nationality was not so easily surmised. He was tall and thin, with iron-gray hair, complexion so sallow as to be almost yellow, black moustache and imperial, handsome in his way, distinguished, indescribable. By his side was a girl who had the air of wearing her first long skirt, whose hair was arranged in somewhat juvenile fashion, and whose dark eyes were still glowing with the joy of the music. Her figure, though very slim, was delightful, and she walked as though her feet touched the clouds. Her laugh, which I heard distinctly as she brushed by me only a few feet away, was like music. Of all the people who had passed me, or whom I had come across during my fortnight's stay in Paris, there was no one half so attractive. The girl was absolutely charming; the man, remarkable not only in himself, but for a certain air of repressed emotion, which, while it robbed his features of the dignity of repose, was still, in a way, fascinating....