The Lord of Dynevor 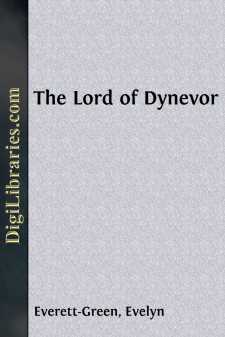 Far down the widening valley, and up the wild, picturesque ravine, rang the strange but not unmusical call. It awoke the slumbering echoes of the still place, and a hundred voices seemed to take up the cry, and pass it on as from mouth to mouth. But the boy's quick ears were not to be deceived by the mocking voices of the spirits of solitude, and presently the call rang out again with greater clearness than before:

The boy stood with his head thrown back, his fair curls floating in the mountain breeze, his blue eyes, clear and bright and keen as those of a wild eaglet, fixed upon a craggy ridge on the opposite side of the gorge, whilst his left hand was placed upon the collar of a huge wolfhound who stood beside him, sniffing the wind and showing by every tremulous movement his longing to be off and away, were it not for the detaining hand of his young master.

The lad was very simply dressed in a tunic of soft, well-dressed leather, upon the breast of which was stamped some device which might have been the badge of his house. His active limbs were encased in the same strong, yielding material, and the only thing about him which seemed to indicate rank or birth was a belt with a richly-chased gold clasp and a poniard with a jewelled hilt.

Perhaps the noble bearing of the boy was his best proof of right to the noble name he bore. One of the last of the royal house of Dynevor, he looked every inch a prince, as he stood bare-headed in the sunlight amidst the everlasting hills of his well-loved home, too young to see the clouds which were settling so darkly and so surely upon the bright horizon of his life -- his dreams still of glory and triumph, culminating in the complete emancipation of his well-loved country from the hated English yoke.

The dog strained and whined against the detaining clasp upon his neck, but the boy held him fast.

"Nay, Gelert, we are not going a-hunting," he said. "Hark! is not that the sound of a horn? Are they not even now returning? Over yon fell they come. Let me but hear their hail, and thou and I will be off to meet them. I would they heard the news first from my lips. My mother bid me warn them. I wot she fears what Llewelyn and Howel might say or do were they to find English guests in our hall and they all unwarned."

Once more the boy raised his voice in the wild call which had awakened the echoes before, and this time his practised ear distinguished amongst the multitudinous replies an answering shout from human lips. Releasing Gelert, who dashed forward with a bay of delight, the lad commenced springing from rock to rock up the narrowing gorge, until he reached a spot where the dwindling stream could be crossed by a bound; from which spot a wild path, more like a goat track than one intended for the foot of man, led upwards towards the higher portions of the wild fell.

The boy sped onwards with the fleetness and agility of a born mountaineer. The hound bounded at his side; and before either had traversed the path far, voices ahead of them became distinctly audible, and a little group might be seen approaching, laden with the spoils of the chase....