The Log of the Sun A Chronicle of Nature's Year 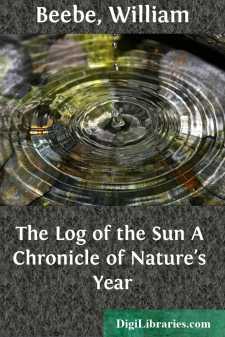 BIRDS OF THE SNOW

No fact of natural history is more interesting, or more significant of the poetry of evolution, than the distribution of birds over the entire surface of the world. They have overcome countless obstacles, and adapted themselves to all conditions. The last faltering glance which the Arctic explorer sends toward his coveted goal, ere he admits defeat, shows flocks of snow buntings active with warm life; the storm-tossed mariner in the midst of the sea, is followed, encircled, by the steady, tireless flight of the albatross; the fever-stricken wanderer in tropical jungles listens to the sweet notes of birds amid the stagnant pools; while the thirsty traveller in the desert is ever watched by the distant buzzards. Finally when the intrepid climber, at the risk of life and limb, has painfully made his way to the summit of the most lofty peak, far, far above him, in the blue expanse of thin air, he can distinguish the form of a majestic eagle or condor.

At the approach of winter the flowers and insects about us die, but most of the birds take wing and fly to a more temperate climate, while their place is filled with others which have spent the summer farther to the north. Thus without stirring from our doorway we may become acquainted with many species whose summer homes are hundreds of miles away.

No time is more propitious or advisable for the amateur bird lover to begin his studies than the first of the year. Bird life is now reduced to its simplest terms in numbers and species, and the absence of concealing foliage, together with the usual tameness of winter birds, makes identification an easy matter.

In January and the succeeding month we have with us birds which are called permanent residents, which do not leave us throughout the entire year; and, in addition, the winter visitors which have come to us from the far north.

Few of our winter birds can boast of bright colours; their garbs are chiefly grays and browns, but all have some mark or habit or note by which they can be at once named. For example, if you see a mouse hitching spirally up a tree-trunk, a closer look will show that it is a brown creeper, seeking tiny insects and their eggs in the crevices of the trunk. He looks like a small piece of the roughened bark which has suddenly become animated. His long tail props him up and his tiny feet never fail to find a foothold. Our winter birds go in flocks, and where we see a brown creeper we are almost sure to find other birds.

Nuthatches are those blue-backed, white or rufous breasted little climbers who spend their lives defying the law of gravity....