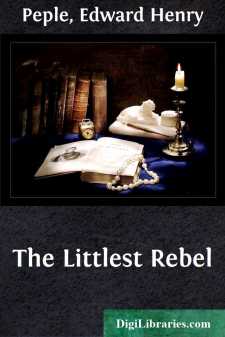 Young Mrs. Herbert Cary picked up her work basket and slowly crossed the grass to a shady bench underneath the trees. She must go on with her task of planning a dress for Virgie. But the prospect of making her daughter something wearable out of the odds and ends of nothing was not a happy one. In fact, she was still poking through her basket and frowning thoughtfully when a childish voice came to her ears.

Immediately came a sound of tumultuous feet and Miss Virginia Houston Cary burst upon the scene. She was a tot of seven with sun touched hair and great dark eyes whose witchery made her a piquant little fairy. In spite of her mother's despair over her clothes Virgie was dressed, or at least had been dressed at breakfast time, in a clean white frock, low shoes and white stockings, although all now showed signs of strenuous usage. Clutched to her breast as she ran up to her mother's side was "Susan Jemima," her one beloved possession and her doll. Behind Virgie came Sally Ann, her playmate, a slim, barefooted mulatto girl whose faded, gingham dress hung partly in tatters, halfway between her knees and ankles. In one of Sally Ann's hands, carried like a sword, was a pointed stick; in the other, a long piece of blue wood-moss from which dangled a bit of string.

"Oh, Mother," cried the small daughter of the Carys, as she came up flushed and excited, "what do you reckon Sally Ann and me have been playing out in the woods!"

"What, dear!" and Mrs. Cary's gentle hand went up to lift the hair back from her daughter's dampened forehead.

"Blue Beard!" echoed her mother in astonishment at this childish freak of amusement.

"Not really—on this hot day."

"Um, hum," nodded Virgie emphatically. "You know he—he—he was the terriblest old man that—that ever was. An' he had so many wifses that—"

"Well, I thought it was that, but Sally Ann's older'n me and she said 'wifses.'"

"Well, you know, Mother, Blue Beard had such a bad habit of killin' his wives that—that some of the ladies got so they—they almost didn't like to marry him!"

"Gracious, what a state of affairs," cried Mrs. Cary, in well feigned amazement at the timidity of the various Mrs. Blue Beards. "And then—"

"Well, the last time he got married to—to another one—her name was Mrs. Fatima. An'—an' I've been playin' her."

"And who played Blue Beard?"

Clutching the piece of moss from Sally Ann, Virgie ran behind the girl and put her chubby arms around her neck. "This is his blue beard, Mother. Hold still, Sally Ann—My lord, I mean—till I get it tied in the right place."

"Be keerful, Miss Virgie," advised the colored girl. "You's a-ticklin' my nose. I'se gwine to sneeze ef yo' don't, and jes blow my beard all away."

"Oh, don't be such a baby," remonstrated the earnest Miss Virginia, with a correcting slap. "S'pose you were a man an' had to wear one all the time. Now! Stand up! Look, Mother!"

"I'm afraid of him already. He's so ferocious."

"Isn't he? Oh, won't you play with us, Mother? I'll—I'll let you be Mrs. Fatima." And then, as her mother's face showed signs of doubt as to her histrionic ability, "If you were my little girl, I'd do it in a minute."

"All right, dear, of course I will; but I've just remembered a bit of lace in your grandmother's trunk in the attic....