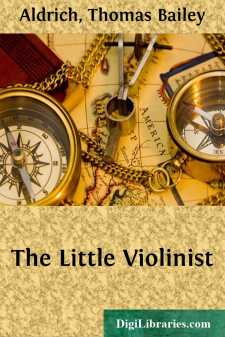 Weep with me, all you that readThis little story;And know, for whom a tear you shed,Death's self is sorry.Ben Jonson.

This story is no invention of mine. I could not invent anything half so lovely and pathetic as seems to me the incident which has come ready-made to my hand.

Some of you, doubtless, have heard of James Speaight, the infant violinist, or Young Americus, as he was called. He was born in London, I believe, and was only four years old when his father brought him to this country, less than three years ago. Since that time he has appeared in concerts and various entertainments in many of our principal cities, attracting unusual attention by his musical skill. I confess, however, that I had not heard of him until last month, though it seems he had previously given two or three public performances in the city where I live. I had not heard of him, I say, until last month; but since then I do not think a day has passed when this child's face has not risen up in my memory—the little half-sad face, as I saw it once, with its large, serious eyes and infantile mouth.

I have, I trust, great tenderness for all children; but I know that I have a special place in my heart for those poor little creatures who figure in circuses and shows, or elsewhere, as "infant prodigies." Heaven help such little folk! It was an unkind fate that did not make them commonplace, stupid, happy girls and boys like our own Fannys and Charleys and Harrys. Poor little waifs, that never know any babyhood or childhood—sad human midges, that flutter for a moment in the glare of the gaslights, and are gone. Pitiful little children, whose tender limbs and minds are so torn and strained by thoughtless task-masters, that it seems scarcely a regrettable thing when the circus caravan halts awhile on its route to make a small grave by the wayside.

I never witness a performance of child-acrobats, or the exhibition of any forced talent, physical or mental, on the part of children, without protesting, at least in my own mind, against the blindness and cruelty of their parents or guardians, or whoever has care of them.

I saw at the theatre, the other night, two tiny girls—mere babies they were—doing such feats upon a bar of wood suspended from the ceiling as made my blood run cold. They were twin sisters, these mites, with that old young look on their faces which all such unfortunates have. I hardly dared glance at them, up there in the air, hanging by their feet from the swinging bar, twisting their fragile spines and distorting their poor little bodies, when they ought to have been nestled in soft blankets in a cosey chamber, with the angels that guard the sleep of little children hovering above them. I hope that the father of those two babies will read and ponder this page, on which I record not alone my individual protest, but the protest of hundreds of men and women who took no pleasure in that performance, but witnessed it with a pang of pity.