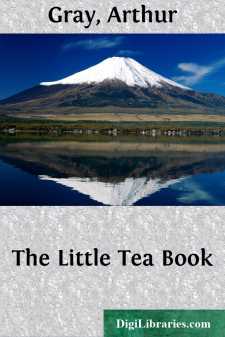 After all, tea is the drink! Domestically and socially it is the beverage of the world. There may be those who will come forward with their figures to prove that other fruits of the soil— agriculturally and commercially—are more important. Perhaps they are right when quoting statistics. But what other product can compare with tea in the high regard in which it has always been held by writers whose standing in literature, and recognized good taste in other walks, cannot be questioned?

A glance through this book will show that the spirit of the tea beverage is one of peace, comfort, and refinement. As these qualities are all associated with the ways of women, it is to them, therefore—the real rulers of the world—that tea owes its prestige and vogue.

Further peeps through these pages prove this to be true; for nearly all the allusions and references to the beverage, by male writers, reveal the womanly influence that tea imparts. But this is not all. The side-lights of history, customs, manners, and modes of living which tea plays in the life of all nations will be found entertaining and instructive. Linked with the fine feminine atmosphere which pervades the drinking of the beverage everywhere, a leaf which can combine so much deserves, at least, a little human hearing for its long list of virtues; for its peaceful walks, talks, tales, tattle, frills, and fancies which go to make up this tribute to "the cup that cheers but not inebriates."

THE ORIGIN OF TEA

Darma, third son of Koyuwo, King of India, a religions high priest from Siaka (the author of that Eastern paganism about a thousand years before the Christian era), coming to China, to teach the way of happiness, lived a most austere life, passing his days in continual mortification, and retiring by night to solitudes, in which he fed only upon the leaves of trees and other vegetable productions. After several years passed in this manner, in fasting and watching, it happened that, contrary to his vows, the pious Darma fell asleep! When he awoke, he was so much enraged at himself, that, to prevent the offence to his vows for the future, he got rid of his eyelids and placed them on the ground. On the following day, returning to his accustomed devotions, he beheld, with amazement, springing up from his eyelids, two small shrubs of an unusual appearance, such as he had never before seen, and of whose qualities he was, of course, entirely ignorant. The saint, however, not being wholly devoid of curiosity—or, perhaps, being unusually hungry—was prompted to eat of the leaves, and immediately felt within him a wonderful elevation of mind, and a vehement desire of divine contemplation, with which he acquainted his disciples, who were eager to follow the example of their instructor, and they readily received into common use the fragrant plant which has been the theme of so many poetical and literary pens in succeeding ages.