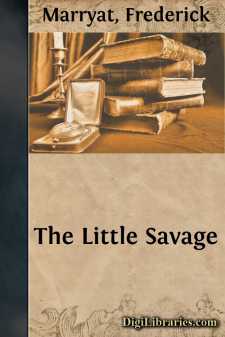 I am about to write a very curious history, as the reader will agree with me when he has read this book. We have more than one narrative of people being cast away upon desolate islands, and being left to their own resources, and no works are perhaps read with more interest; but I believe I am the first instance of a boy being left alone upon an uninhabited island. Such was, however, the case; and now I shall tell my own story.

My first recollections are, that I was in company with a man upon this island, and that we walked often along the sea-shore. It was rocky and difficult to climb in many parts, and the man used to drag or pull me over the dangerous places. He was very unkind to me, which may appear strange, as I was the only companion that he had; but he was of a morose and gloomy disposition. He would sit down squatted in the corner of our cabin, and sometimes not speak for hours—or he would remain the whole day looking out at the sea, as if watching for something, but what I never could tell; for if I spoke, he would not reply; and if near to him, I was sure to receive a cuff or a heavy blow. I should imagine that I was about five years old at the time that I first recollect clearly what passed. I may have been younger. I may as well here state what I gathered from him at different times, relative to our being left upon this desolate spot. It was with difficulty that I did so; for, generally speaking, he would throw a stone at me if I asked questions, that is, if I repeatedly asked them after he had refused to answer. It was on one occasion, when he was lying sick, that I gained the information, and that only by refusing to attend him or bring him food and water. He would be very angry, and say, that when he got well again, he would make me smart for it; but I cared not, for I was then getting strong, whilst he was getting weaker every day, and I had no love for him, for he had never shown any to me, but always treated me with great severity.

He told me, that about twelve years before (not that I knew what he meant by a year, for I had never heard the term used by him), an English ship (I did not know what a ship was) had been swamped near the island, in a heavy gale, and that seven men and one woman had been saved, and all the other people lost. That the ship had been broken into pieces, and that they had saved nothing—that they had picked up among the rocks pieces of the wood with which it had been made, and had built the cabin in which we lived. That one had died after another, and had been buried (what death or burial meant, I had no idea at the time), and that I had been born on the island; (How was I born? thought I)—that most of them had died before I was two years old; and that then, he and my mother were the only two left besides me. My mother had died a few months afterwards. I was obliged to ask him many questions to understand all this; indeed, I did not understand it till long afterwards, although I had an idea of what he would say....