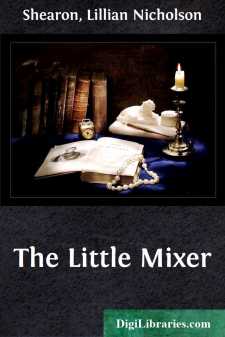 There was no fault to be found with the present itself; the trouble lay in the method of transportation. This thought was definite enough in Hannah's mind, but she had to rely upon a seven-year-old vocabulary for expression, and grown-ups are notably dull of comprehension. Even mothers don't always understand without being told exactly in so many words.

"I didn't say the kimono wasn't nice, Mama," explained Hannah, "and 'course Cousin Carrie was awful good to send it to me, but—but Santy Claus is going to bring Virginia one to-morrow night, down the chimbley!"

Rose Joseph slipped the absurd little garment over her daughter's dainty lingerie frock, and stood her on a chair that she might view herself in the narrow mirror between the windows of the living-room. The child was as lovely as a flower, but vanity was still sound asleep in her soul, and she glanced indifferently at the reflection, her body sagging with disappointment. "It is just like those little Japanese girls wear," her mother cried in that over-enthusiastic adult tone which warns a child he is about to be the recipient of a gold brick. "I am sure Virginia's can't be any nicer than this one!"

"But, Mama, Santy Claus is going bring hers down the chimbley. Mine"—her voice dropped to a mournful key—"mine came through the door!"

"But, darling, what difference does that make just so you get it?"

Pity for her mother's barren childhood shone in Hannah's soft black eyes. "That's—that's no way for presents to come," she explained; "Mama, it's Chris'mus."

"It is Chanuca," Mrs. Joseph responded firmly. "Remember you are a Jewess, dear."

"I can't never forget it," said the child with a catch in her voice, "'specially at Chris'mus."

"But, darling, the Jewish children have Chanuca; it comes about the same time as Christmas, and amounts to the same thing."

Hannah shook her bronze curls. "Chanuca is because the children of Israel took Jerusalem and the temple away from the bad people," she recited glibly, "and—and you say prayers, and light candles—eight days, and—and all your uncles and aunts and cousins send you things, but Santy Claus, he don't pay any 'tention to Chanuca. Chris'mus is just one day, and Santy Claus comes down the chimbley and brings things to all good children—'cept little Jews—because it is the birthday of our Saviour."

Mrs. Joseph was silent so long that Hannah felt she had convinced her mother of the superiority of the Gentile Christmas over the Jewish Chanuca, and she continued more in detail. "And the children's kinfolks just give Santy Claus money, and tell him what to buy, and he brings the presents, and nobody has to bother about it 'cept him."

"Hannah," Mrs. Joseph interrupted coldly, "who told you about the birthday of—of the Saviour?"

"Nellie Halloran," answered Hannah, "and Virginia, too. They've—they've got the same one."

"Darling, hasn't Mama told you many times, that you must never, never talk about religion to Nellie and Virginia?"