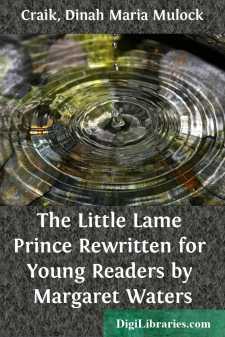 Add to My Favorites
Published: 9 years ago
Downloads: 112
Rating: (0 Votes)

He was the most beautiful prince that ever was born.

Being a prince, people said this; and it was true. When he looked at the candle, his eyes had an earnest expression quite startling in a new-born baby. His nose was aquiline; his complexion was healthy; he was round, fat, and straight-limbed—a splendid baby.

His father and mother, King and Queen of Nomansland, and their subjects were proud and happy, having waited ten years for an heir. The only person not quite happy was the king's brother, who would have been king had the baby not been born, but his Majesty was very kind to him, and gave him a Dukedom as large as a country.

The Prince's christening was to be a grand affair; there were chosen for him four and twenty godfathers and godmothers, who each had to give him a name, and promise to do their utmost for him. When he came of age, he himself had to choose the name—and the godfather or godmother—that he liked best.

All was rejoicing and the rich gave dinners and feasts for the poor.

The only quiet place in the Palace was the room, which though the prince was six weeks old, his mother, the Queen, had not quitted. Nobody thought she was ill as she said nothing about it herself, but lay pale and placid, giving no trouble to anybody.

Christening day came at last and it was as lovely as the Prince himself. All the people in the Palace were beautifully dressed in the clothes which the Queen had given them.

By six in the morning all the royal household had dressed itself in its very best; and then the little Prince was dressed in his magnificent christening robe; which he did not like at all, but kicked and screamed like any common baby. When he had calmed down, they carried him to the bed where the Queen lay.

She kissed and blessed him, and then she gave him up with a gentle smile, saying she "hoped he would be very good, that it would be a very nice christening, and all the guests would enjoy themselves," and turned peacefully over on her bed. She was a very uncomplaining person—the Queen, and her name was Dolorez.

Everything went on as if she had been present. All, even the King himself, had grown used to her absence, for she was not strong, and for years had not joined in the gaieties. The noble company arrived from many countries; also the four-and-twenty godfathers and godmothers, who had been chosen with care, as the people who would be most useful to his Royal Highness should he ever want friends.

They came, walking two and two, with their coronets on their heads—dukes and duchesses, princes and princesses; they all kissed the child and pronounced the name which each had given him. Then the four-and-twenty names were shouted out, one after another, and written down, to be kept in the state records.

Everybody was satisfied except the little Prince, who moaned faintly under his christening robes, which nearly smothered him.

Though very few knew it, the Prince in coming to the chapel had met with an accident. A young lady of rank, whose duty it was to carry him to and from the chapel, had been so busy arranging her train with one hand, that she stumbled and let him fall. She picked him up—the accident was so slight it seemed hardly worth speaking of. The baby had turned pale, but did not cry. No one knew that anything was wrong. Even if he had moaned, the silver trumpets were loud enough to drown his voice. It would have been a pity to let anything trouble such a day.

Such a procession! Heralds in blue and silver; pages in crimson and gold; and a troop of little girls in dazzling white, carrying baskets of flowers, which they strewed all the way before the child and the nurse,—finally the four and twenty godfathers and godmothers, splendid to look at.

The prince was a mere heap of lace and muslin, and had it not been for a canopy of white satin and ostrich feathers, which was held over him whenever he was carried, his presence would have been unnoticed.

"It is just like fairyland," said one little flower-girl to another, "and I think the only thing the Prince wants now is a fairy godmother."

"Does he?" said a shrill, but soft and not unpleasant voice, and a person no larger than a child was seen.

She was a pleasant little, old, grey-haired, grey-eyed woman, dressed all in grey.

"Old woman, you will be kind enough not to say, 'the baby,' but 'the Prince.' Keep away; his Royal Highness is just going to sleep."

"I must kiss him, I am his godmother."