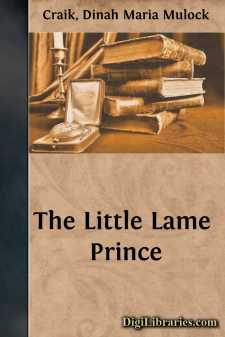 Add to My Favorites
Published: 9 years ago
Downloads: 152
Rating: (0 Votes)

CHAPTER I Yes, he was the most beautiful Prince that ever was born.

Of course, being a prince, people said this; but it was true besides. When he looked at the candle, his eyes had an expression of earnest inquiry quite startling in a new born baby. His nose—there was not much of it certainly, but what there was seemed an aquiline shape; his complexion was a charming, healthy purple; he was round and fat, straight-limbed and long—in fact, a splendid baby, and everybody was exceedingly proud of him, especially his father and mother, the King and Queen of Nomansland, who had waited for him during their happy reign of ten years—now made happier than ever, to themselves and their subjects, by the appearance of a son and heir.

The only person who was not quite happy was the King's brother, the heir presumptive, who would have been king one day had the baby not been born. But as his majesty was very kind to him, and even rather sorry for him—insomuch that at the Queen's request he gave him a dukedom almost as big as a county—the Crown-Prince, as he was called, tried to seem pleased also; and let us hope he succeeded.

The Prince's christening was to be a grand affair. According to the custom of the country, there were chosen for him four-and-twenty god-fathers and godmothers, who each had to give him a name, and promise to do their utmost for him. When he came of age, he himself had to choose the name—and the godfather or god-mother—that he liked the best, for the rest of his days.

Meantime all was rejoicing. Subscriptions were made among the rich to give pleasure to the poor; dinners in town-halls for the workingmen; tea-parties in the streets for their wives; and milk-and-bun feasts for the children in the schoolrooms. For Nomansland, though I cannot point it out in any map, or read of it in any history, was, I believe, much like our own or many another country.

As for the palace—which was no different from other palaces—it was clean "turned out of the windows," as people say, with the preparations going on. The only quiet place in it was the room which, though the Prince was six weeks old, his mother the Queen had never quitted. Nobody said she was ill, however—it would have been so inconvenient; and as she said nothing about it herself, but lay pale and placid, giving no trouble to anybody, nobody thought much about her. All the world was absorbed in admiring the baby.

The christening-day came at last, and it was as lovely as the Prince himself. All the people in the palace were lovely too—or thought themselves so—in the elegant new clothes which the Queen, who thought of everybody, had taken care to give them, from the ladies-in-waiting down to the poor little kitchen-maid, who looked at herself in her pink cotton gown, and thought, doubtless, that there never was such a pretty girl as she.

By six in the morning all the royal household had dressed itself in its very best; and then the little Prince was dressed in his best—his magnificent christening robe; which proceeding his Royal Highness did not like at all, but kicked and screamed like any common baby....