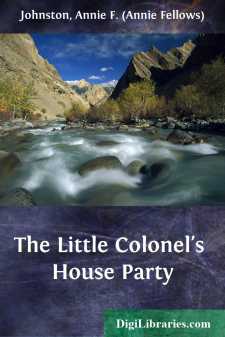 CHAPTER I. THE INVITATIONS ARE SENT.

Down the long avenue that led from the house to the great entrance gate came the Little Colonel on her pony. It was a sweet, white way that morning, filled with the breath of the locusts; white overhead where the giant trees locked branches to make an arch of bloom nearly a quarter of a mile in length, and white underneath where the fallen blossoms lay like scattered snowflakes along the path.

Everybody, in Lloydsboro Valley knew Locust. "It is one of the prettiest places in all Kentucky," they were fond of saying, and every visitor to the Valley was taken past the great entrance gate to admire the long rows of stately old trees, and the great stone house at the end, whose pillars gleamed white through the Virginia creeper that nearly covered it.

Everybody knew old Colonel Lloyd, too, the owner of the place. He also was often pointed out to the summer visitors. Some people called attention to him because he was an old Confederate soldier who had given his good right arm to the cause he loved, some because they thought he resembled Napoleon, and others because they had some amusing tale to tell of the eccentric things he had said or done.

Nearly every one who pointed out the imposing figure, which was clad always in white duck or linen in the summer, and wrapped in a picturesque military cape in winter, added the remark: "And he is the Little Colonel's grandfather." To be the grandfather of such an attractive little bunch of mischief as Lloyd Sherman was when she first came to the Valley was a distinction of which any man might well be proud, and Colonel Lloyd was proud of it. He was proud of the fact that she had inherited his lordly manner, his hot temper, and imperious ways. It pleased him that people had given her his title of Colonel on account of the resemblance to himself. She had outgrown it somewhat since she had first been nicknamed the Little Colonel. Then she was only a spoiled baby of five; but now his pride in her was even greater, since she had grown into a womanly little maid of eleven. He was proud of her delicate, flower-like beauty, of her dainty ways, and all her little schoolgirl accomplishments.

"She is like those who have gone before," he used to say to himself sometimes, pacing slowly back and forth under the locusts; and the bloom-tipped branches above would nod to each other as if they understood. "Yes-s, yes-s," they whispered in the soft lisping language of the leaves, "we know! She's like Amanthis,—sweet-souled and starry-eyed; we were here when you brought her home, a bride. She's like Amanthis! Like Amanthis!"

Under the blossoms rode the Little Colonel, all in white herself this May morning, except the little Napoleon hat of black velvet, set jauntily over her short light hair. Into the cockade she had stuck a spray of locust blossoms, and as she rode slowly along she fastened a bunch of them behind each ear of her pony, whose coat was as soft and black as the velvet of her hat. "Tarbaby" she called him, partly because he was so black, and partly because that was the name of her favourite Uncle Remus story.

"There!" she exclaimed, when the flowers were fastened to her satisfaction. "Yo' lookin' mighty fine this mawnin', Tarbaby! Maybe I'll take you visitin' aftah I've been to the post-office and mailed these lettahs. You didn't know that Judge Moore's place is open for the summah, did you, and that all the family came out yesta'day? Well, they did, and if Bobby Moore isn't ovah to my house by the time we get back home, we'll go ovah to Bobby's."

As she spoke, she passed through the gate at the end of the avenue and turned into the public road, a wide pike with a railroad track on one side of it and a bridle-path on the other....