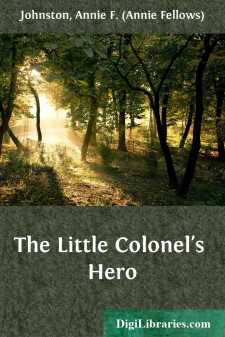 "Oh, Tarbaby! Everybody has forgotten that it is my birthday! Even Papa Jack has gone off to town without saying a word about it, and he nevah did such a thing befo' in all his life!"

As she spoke, the Little Colonel put her arm around her pony's neck, and for a moment her fair little head was pressed disconsolately against its velvety black mane.

"It isn't the presents I care about," she whispered, choking back a heart-broken sob; "but oh, Tarbaby, it's the bein' forgotten! Of co'se mothah couldn't be expected to remembah, she's been so ill. But I think grandfathah might, or Mom Beck, or somebody. If there'd only been one single person when I came down-stairs this mawnin' to say 'I wish you many happy returns, Lloyd, deah,' I wouldn't feel so bad. But there wasn't, and I nevah felt so misah'ble and lonesome and left out since I was bawn."

Tarbaby had no words with which to comfort his little mistress, but he seemed to understand that she was in trouble, and rubbed his nose lovingly against her shoulder. The mute caress comforted her as much as words could have done, and presently she climbed into the saddle and started slowly down the avenue to the gate.

It was a warm May morning, sweet with the fragrance of the locusts, for the great trees arching above her were all abloom, and the ground beneath was snowy with the wind-blown petals. Under the long white arch she rode, with the fallen blossoms white at her feet. The pewees called from the cedars and the fat red-breasted robins ran across the lawn just as they had done the spring before, when it was her eleventh birthday, and she had ridden along that same way singing, the happiest hearted child in the Valley. But she was not singing to-day. Another sob came up in her throat as she thought of the difference.

"Now I'm a whole yeah oldah," she sighed. "Oh, deah! I don't want to grow up, one bit, and I'll be suah 'nuff old on my next birthday, for I'll be in my teens then. I wondah how that will feel. This last yeah was such a lovely one, for it brought the house pahty and so many holidays. But this yeah has begun all wrong. I can't help feelin' that it's goin' to bring me lots of trouble."

Half-way down the avenue she thought she heard some one calling her, and stopped to look back. But no one was in sight. The shutters were closed in her mother's room.

"Last yeah she stood at the window and waved to me when I rode away," sighed the child, her eyes filling with tears again. "Now she's so white and ill it makes me cry to look at her. Maybe that is the trouble this yeah is goin' to bring me. Betty's mothah died, and Eugenia's, and maybe"—but the thought was too dreadful to put into words, and she stopped abruptly.

"Mom Beck was right," she whispered with a nod of her head. "She said that sad thoughts are like crows. They come in flocks. I wish I could stop thinkin' about such mou'nful things."

A train passed as she cantered through the gate and started down the road beside the railroad track. She drew rein to watch it thunder by....