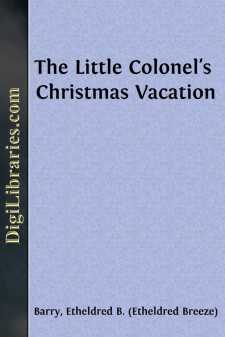 Warwick Hall looked more like an old English castle than a modern boarding-school for girls. Gazing at its high towers and massive portal, one almost expected to see some velvet-clad page or lady-in-waiting come down the many flights of marble steps leading between stately terraces to the river. Even a knight with a gerfalcon on his wrist would not have seemed out of place, and if a slow-going barge had trailed by between the willow-fringed banks of the Potomac, it would have seemed more in keeping with the scene than the steamboats puffing past to Mount Vernon, with crowds of excursionists on deck.

The gorgeous peacocks strutting along the terraces in the sun were partly responsible for this impression of mediæval grandeur. It was for that very purpose that Madam Chartley, the head of the school, kept the peacocks. That was one reason, also, that she proudly retained the coat of arms in the great stained glass window over the stairs, when circumstances obliged her to turn her ancestral home into a boarding-school. She thought a sense of mediæval grandeur was good for girls, especially young American girls, who are apt to be brought up without proper respect for age, either of individuals or institutions.

In the dining-room, two long lines of portraits looked down from opposite walls. One was headed by a grim old earl, and the other by an equally grim old Pilgrim father of Mayflower fame. The two lines joined over the fireplace in the portraits of Madam Chartley's great-grandparents. It was for this great-grandmother, a daughter of the Pilgrims and a beautiful Washington belle, that Warwick Hall had been built; for she refused to give up her native land entirely, even for the son of an earl.

At his death, when the title and the English estates were inherited by a distant cousin, the only male heir, this place on the Potomac was all that was left to her and her daughter. It had been closed for two generations. Now it had come down at last to Madam Chartley. Although it found her too poor to keep up such an establishment, it also found her too proud to let her heritage go to strangers, and practical enough to find some way by which she might retain it comfortably. That way was to turn it into a first-class boarding-school. She was a graduate of one of the best American colleges. The patrician standards inherited from her old world ancestors, combined with the energy and common sense of the new, made her an ideal woman to undertake the education of young girls, and Warwick Hall was an ideal place in which to carry out her wise theories.

The Potomac was red with the glow of the sunset one September evening, when four girls, on their way back to Washington after a day's sightseeing, hurried to the upper deck of the steamboat. Some one had called out that Warwick Hall was in sight. In their haste to reach the railing, they scarcely noticed a tall girl in blue, already standing there, who obligingly moved along to make room for them.

She scrutinized them closely, however, for she had seen them in the cabin a little while before, and their conversation had been so amusing that she longed to make their acquaintance....