The Life-Story of Insects 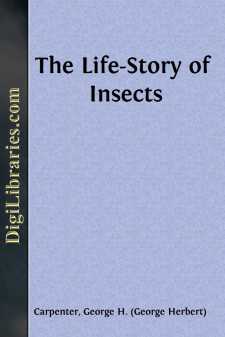 Among the manifold operations of living creatures few have more strongly impressed the casual observer or more deeply interested the thoughtful student than the transformations of insects. The schoolboy watches the tiny green caterpillars hatched from eggs laid on a cabbage leaf by the common white butterfly, or maybe rears successfully a batch of silkworms through the changes and chances of their lives, while the naturalist questions yet again the 'how' and 'why' of these common though wondrous life-stories, as he seeks to trace their course more fully than his predecessors knew.

Everyone is familiar with the main facts of such a life-story as that of a moth or butterfly. The form of the adult insect ( a) is dominated by the wings—two pairs of scaly wings, carried respectively on the middle and hindmost of the three segments that make up the thorax or central region of the insect's body. Each of these three segments carries a pair of legs. In front of the thorax is the head on which the pair of long jointed feelers and the pair of large, sub-globular, compound eyes are the most prominent features. Below the head, however, may be seen, now coiled up like a watch-spring, now stretched out to draw the nectar from some scented blossom, the butterfly's sucking trunk or proboscis, situated between a pair of short hairy limbs or palps (). These palps belong to the appendages of the hindmost segment of the head, appendages which in insects are modified to form a hind-lip or labium, bounding the mouth cavity below or behind. The proboscis is made up of the pair of jaw-appendages in front of the labium, the maxillae, as they are called. Behind the thorax is situated the abdomen, made up of nine or ten recognisable segments, none of which carry limbs comparable to the walking legs, or to the jaws which are the modified limbs of the head-segments. The whole cuticle or outer covering of the body, formed (as is usual in the group of animals to which insects belong) of a horny (chitinous) secretion of the skin, is firm and hard, and densely covered with hairy or scaly outgrowths. Along the sides of the insect are a series of paired openings or spiracles, leading to a set of air-tubes which ramify throughout the body and carry oxygen directly to the tissues.

Fig. 2. A. Head of a typical Moth, showing proboscis formed by flexible maxillae (g) between the labial palps (p); c, face; e, eye; the structure m has been regarded as the vestige of a mandible. B. Basal part (b) of maxilla removed from head, with vestigial palp (p). Magnified.

Such a butterfly as we have briefly sketched lays an egg on the leaf of some suitable food-plant, and there is hatched from it the well-known crawling larva ( b, c, d) called a caterpillar, offering in many superficial features a marked contrast to its parent. Except on the head, whose surface is hard and firm, the caterpillar's cuticle is as a rule thin and flexible, though it may carry a protective armature of closely set hairs, or strong sharp spines. The feelers ( At) are very short and the eyes are small and simple. In connection with the mouth, there are present in front of the maxillae a pair of mandibles ( Mn), strong jaws, adapted for biting solid food, which are absent from the adult butterfly, though well developed in cockroaches, dragon-flies, beetles, and many other insects....