The Life, Public Services and Select Speeches of Rutherford B. Hayes 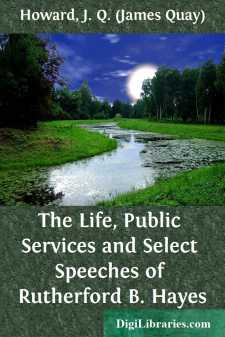 George Hayes, of Scotland, came to America by the way of England, and settled at Windsor, in the Colony of Connecticut, in 1682. He married, in 1683, Abigail Dibble, who was born on Long Island in 1666. From these ancestors the direct line of descent to the Republican candidate for President of the United States is the following:

The earlier family traditions connect the name and descent of George Hayes with the fighting plowman mentioned in Scottish history, who at Loncarty, in Perthshire, turned back the invaders of his country, in a narrow pass, with the sole aid of his own valorous sons.

"Pull your plow and harrow to pieces, and fight," said the sturdy Scotchman to his sons. They fought, father and sons together, and won. A like command seems to have come down the centuries to an American-born son—"Tear your briefs and petitions to pieces, and fight." He also fought, and, though sorely wounded, won. Shall the crown of valor be withheld by a free people that was once bestowed by a Scottish king?

Daniel Hayes, the third of the ten children of George Hayes, was born at Windsor, in 1686. At the age of twenty-three, while fighting in defense of Simsbury—now Granby—to which town his father's family had removed, he was captured and carried off by the French and Indians. He was held as a prisoner in Canada for five years, and being a young man of great physical strength and vigor, the Indians adopted him as one of their race. His freedom was finally purchased through the intervention of a Frenchman, the colonial assembly of Connecticut, sitting at New Haven, having made an appropriation of public funds in aid of that specific purpose. An account of the captivity of this early defender of New England homes is found in Phelps' "History of Simsbury, Granby, and Canton." The wife of Daniel Hayes was the daughter of John Lee, who was noted for his bravery in fighting Indians.

Captain Ezekiel Hayes, who gained his title in the military service of the Colonies, married the great-granddaughter of the Rev. John Russell, the famous preacher of Wethersfield and Hadley, who concealed the regicides at Hadley for many years.

Rutherford Hayes, the grandfather of the subject of our biography, was born at New Haven, Connecticut, July 29, 1756. He married, in 1779, at West Brattleboro, Vermont—whither he had removed the year before—Chloe Smith, whose ancestry fill a large space in the "History of Hadley," several of whom lost their lives while fighting in defense their own and neighboring towns. From this fortunate and happy union, which continued unbroken for fifty-eight years, have sprung a race of accomplished women and honor-deserving men....