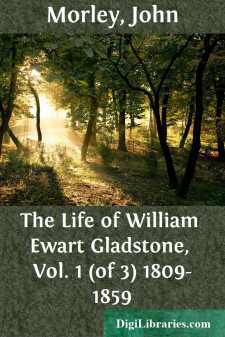 I am well aware that to try to write Mr. Gladstone's life at all—the life of a man who held an imposing place in many high national transactions, whose character and career may be regarded in such various lights, whose interests were so manifold, and whose years bridged so long a span of time—is a stroke of temerity. To try to write his life to-day, is to push temerity still further. The ashes of controversy, in which he was much concerned, are still hot; perspective, scale, relation, must all while we stand so near be difficult to adjust. Not all particulars, more especially of the latest marches in his wide campaign, can be disclosed without risk of unjust pain to persons now alive. Yet to defer the task for thirty or forty years has plain drawbacks too. Interest grows less vivid; truth becomes harder to find out; memories pale and colour fades. And if in one sense a statesman's contemporaries, even after death has abated the storm and temper of faction, can scarcely judge him, yet in another sense they who breathe the same air as he breathed, who know at close quarters the problems that faced him, the materials with which he had to work, the limitations of his time—such must be the best, if not the only true memorialists and recorders.

Every reader will perceive that perhaps the sharpest of all the many difficulties of my task has been to draw the line between history and biography—between the fortunes of the community and the exploits, thoughts, and purposes of the individual who had so marked a share in them. In the case of men of letters, in whose lives our literature is admirably rich, this difficulty happily for their authors and for our delight does not arise. But where the subject is a man who was four times at the head of the government—no phantom, but dictator—and who held this office of first minister for a longer time than any other statesman in the reign of the Queen, how can we tell the story of his works and days without reference, and ample reference, to the course of events over whose unrolling he presided, and out of which he made history? It is true that what interests the world in Mr. Gladstone is even more what he was, than what he did; his brilliancy, charm, and power; the endless surprises; his dualism or more than dualism; his vicissitudes of opinion; his subtleties of mental progress; his strange union of qualities never elsewhere found together; his striking unlikeness to other men in whom great and free nations have for long periods placed their trust. I am not sure that the incessant search for clues through this labyrinth would not end in analysis and disquisition, that might be no great improvement even upon political history. Mr. Gladstone said of reconstruction of the income-tax that he only did not call the task herculean, because Hercules could not have done it. Assuredly, I am not presumptuous enough to suppose that this difficulty of fixing the precise scale between history and biography has been successfully overcome by me. It may be that Hercules himself would have succeeded little better.

Some may think in this connection that I have made the preponderance of politics excessive in the story of a genius of signal versatility, to whom politics were only one interest among many. No doubt speeches, debates, bills, divisions, motions, and manœuvres of party, like the manna that fed the children of Israel in the wilderness, lose their savour and power of nutriment on the second day. Yet after all it was to his thoughts, his purposes, his ideals, his performances as statesman, in all the widest significance of that lofty and honourable designation, that Mr. Gladstone owes the lasting substance of his fame. His life was ever 'greatly absorbed,' he said, 'in working the institutions of his country.' Here we mark a signal trait. Not for two centuries, since the historic strife of anglican and puritan, had our island produced a ruler in whom the religious motive was paramount in the like degree. He was not only a political force but a moral force. He strove to use all the powers of his own genius and the powers of the state for moral purposes and religious. Nevertheless his mission in all its forms was action. He had none of that detachment, often found among superior minds, which we honour for its disinterestedness, even while we lament its impotence in result....