The Life of Trust: Being a Narrative of the Lord's Dealings With George Muller 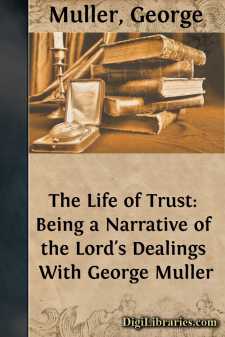 Having been requested by Messrs. Gould and Lincoln to examine the work entitled “A Narrative of some of the Lord’s Dealings with George Müller,” the Editor was convinced that its republication in this country would greatly promote the piety of American Christians. But to reproduce the work in its original form was attended with difficulty. The “Narrative,” in four parts, (published respectively in 1837, 1841, 1845, and 1856,) and the four “Annual Reports” issued in 1857, 1858, 1859, and 1860, would occupy not less than eighteen hundred pages of the size of those contained in this volume. The cost of such a work would greatly limit its circulation and its usefulness, if indeed any publisher should undertake its issue. There seemed no alternative except to abandon the idea of an American edition altogether, or to present it to the public in a condensed form.

Such a condensation seemed, on examination, to be entirely practicable. Owing to the “Parts” of the “Narrative” having been published at four separate periods, it often happens that the same matter is several times repeated. A large portion of the space is occupied with the acknowledgment of donations received. These entries, although appropriate in a report made to the donors and to the British public, have not the same interest for American readers. The discussion of some points in church polity, and the account of the Author’s journeys upon the Continent, though interesting and instructive, are not necessary to the continuity of the history. Although in some cases the portions which have been omitted cover a considerable period of time, yet it is believed that all which is essential has been retained. No pains have been spared on the part of the Editor to preserve the value of the work while reducing its compass, and to give, in a form universally accessible, a clear exhibition of the wonderful results of the life of George Müller, as well as of the principles by which his life has been governed.

Believing that the book would be rendered more attractive to the reader, and more convenient for reference, the Editor has divided it into Chapters, and has prefixed to each a brief statement of some of the leading subjects introduced in the Chapter. For these “contents,” as well as for the headings of the Chapters, and for the general title of the volume, the Editor alone is responsible.

The “Narrative” of George Müller has been blessed in other lands to the awakening of spiritual life. It was the means, as will be observed by the reader, of greatly forwarding, if not of originating, the work of grace now advancing in Ireland. “The Life of Trust” is submitted to the Christian public of America, in the hope that its still small voice may be heard even amid the clangor of political strife and the revulsion of commercial interests, and that it may be used by the Divine Spirit to promote and strengthen in the hearts of American Christians, Faith in the Living God....