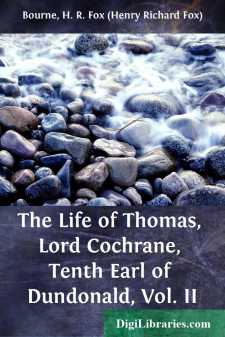 Lord Cochrane entered the Egean Sea with his little schooner Unicorn and the French brig Sauveur on the 17th of March, 1827. In the afternoon he halted off the island of Hydra, there to leave the Greek deputy Orlando, who had accompanied him from Marseilles. "I was surprised," he said, "to observe that, except the open batteries near the town of Hydra, the whole coast of the island remained unprotected, although, in a smooth sea, a landing might be effected in almost every part of its circumference. The town of Hydra is built in an irregular manner on the fall of the mountain about the port, and presents a clean appearance, the houses being all whitewashed. There is not a tree on the island, though there are a few straggling bushes. There is scarcely any land capable of cultivation; but there are some vineyards on the south side and a few small gardens near the town. The port is small, the water deep, and the vessels made fast by hawsers to the shore. It is evident, that, if Greece obtains independence, this island, to which the inhabitants fled to enjoy that species of precarious liberty that depends on eluding the view of tyranny, must be abandoned. Even water is only to be had from tanks which are filled by the winter's rain."

From Hydra Lord Cochrane proceeded to Egina, making a circuit in order that he might have a view of Athens. "The Acropolis," he wrote, "with the whole scenery at sunset, was beautiful. Alas, what a change! what melancholy recollections crowd on the mind! There was the seat of science, of literature, and the arts. At this instant the barbarian Turk is actually demolishing, by the shells that now are flying through the air, the scanty remains of the once magnificent temples in the Acropolis."

He called at Egina on the 18th, in order to despatch letters, announcing his arrival, to the Governing Commission, as it was called, then located in the island, before proceeding to Poros, where he anchored on the morning of the 19th. "The main entrance," we further read in his journal, "is scarcely wide enough to work a ship in, if the wind is from the land. The water, however, is sufficiently deep close to the shore; and the port, when you have entered through this narrow channel, is one of the finest in the world. There is another entrance towards the south, but it is shallow and crooked, and consequently used only by small vessels. The town of Poros consists of a number of irregularly-built houses on the side of a hill, and merits the appellation of picturesque. There are remains of temples on the island, and the stone is yet to be seen on which Demosthenes is said to have been sitting when he was recalled by Antipater to Athens, and in consequence of which recall he took poison and died."

No sooner was the joyful intelligence conveyed to the inhabitants that Lord Cochrane, the long-expected deliverer of Greece, had actually arrived, than all the leading men who happened to be in Poros at the time hurried on board the Unicorn to welcome their champion and to give personal assurance of their devotion to him....