The Life of Thomas, Lord Cochrane, Tenth Earl of Dundonald, G.C.B., Admiral of the Red, Rear-Admiral of the Fleet, Etc., Etc. Vol. I 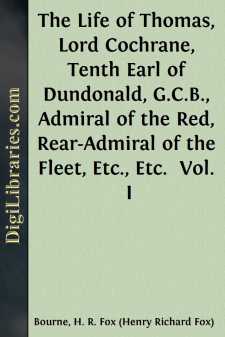 CHAPTER I. INTRODUCTION.—LORD COCHRANE'S ANCESTRY.—HIS FIRST OCCUPATIONS IN THE NAVY.—HIS CRUISE IN THE "SPEEDY" AND CAPTURE OF THE "GAMO."—HIS EXPLOITS IN THE "PALLAS."—THE BEGINNING OF HIS PARLIAMENTARY LIFE.—HIS TWO ELECTIONS AS MEMBER FOR HONITON.—HIS ELECTION FOR WESTMINSTER.—FURTHER SEAMANSHIP.—THE BASQUE ROADS AFFAIR.—THE COURT-MARTIAL ON LORD GAMBIER, AND ITS INJURIOUS EFFECTS ON LORD COCHRANE'S NAVAL CAREER.—HIS PARLIAMENTARY OCCUPATIONS.—HIS VISIT TO MALTA AND ITS ISSUES.—THE ANTECEDENTS AND CONSEQUENCES OF THE STOCK EXCHANGE TRIAL.

Thomas, Loud Cochrane, tenth Earl of Dundonald, was born at Annsfield, in Lanark, on the 14th of December, 1775, and died in London on the 31st of October, 1860. Shortly before his death he wrote two volumes, styled "The Autobiography of a Seaman," which set forth his history down to 1814, the fortieth year of his age. To those volumes the present work, recounting his career during the ensuing six-and-forty years, is intended to serve as a sequel. Before entering upon the later narrative, however, it will be necessary briefly to recapitulate the incidents that have been already detailed.

The Earl of Dundonald was descended from a long line of knights and barons, chiefly resident in Renfrew and Ayr, many of whom were men of mark in Scottish history during the thirteenth and following centuries. Robert Cochran was the especial favourite and foremost counsellor of James III., who made him Earl of Mar; but the favours heaped upon him, and perhaps a certain arrogance in the use of those favours, led to so much opposition from his peers and rivals that he was assassinated by them in 1480.[A]

[Footnote A: Pinkerton, the historian, gives some curious details, illustrating not only Robert Cochran's character, but also the condition of government and society in Scotland four centuries ago. "The Scottish army," he says, "amounting to about fifty thousand, had crowded to the royal banner at Burrough Muir, near Edinburgh, whence they marched to Soutray and to Lauder, at which place they encamped between the church and the village. Cochran, Earl of Mar, conducted the artillery. On the morning after their arrival at Lauder, the peers assembled in a secret council, in the church, and deliberated upon their designs of revenge…. Cochran, ignorant of their designs, left the royal presence to proceed to the council. The earl was attended by three hundred men, armed with light battle-axes, and distinguished by his livery of white with black fillets. He was clothed in a riding cloak of black velvet, and wore a large chain of gold around his neck; his horn of the chase, or of battle, was adorned with gold and precious stones, and his helmet, overlaid with the same valuable metal, was borne before him. Approaching the door of the church, he commanded an attendant to knock with authority; and Sir Robert Douglas, of Lochleven, who guarded the passage, inquiring the name, was answered, 'Tis I, the Earl of Mar.' Cochran and some of his friends were admitted....