The Life of the Spider 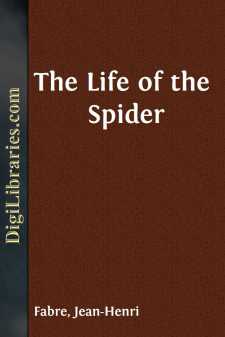 CHAPTER I: THE BLACK-BELLIED TARANTULA

The Spider has a bad name: to most of us, she represents an odious, noxious animal, which every one hastens to crush under foot.  Against this summary verdict the observer sets the beast’s industry, its talent as a weaver, its wiliness in the chase, its tragic nuptials and other characteristics of great interest.  Yes, the Spider is well worth studying, apart from any scientific reasons; but she is said to be poisonous and that is her crime and the primary cause of the repugnance wherewith she inspires us.  Poisonous, I agree, if by that we understand that the animal is armed with two fangs which cause the immediate death of the little victims which it catches; but there is a wide difference between killing a Midge and harming a man.  However immediate in its effects upon the insect entangled in the fatal web, the Spider’s poison is not serious for us and causes less inconvenience than a Gnat-bite.  That, at least, is what we can safely say as regards the great majority of the Spiders of our regions.

Nevertheless, a few are to be feared; and foremost among these is the Malmignatte, the terror of the Corsican peasantry.  I have seen her settle in the furrows, lay out her web and rush boldly at insects larger than herself; I have admired her garb of black velvet speckled with carmine-red; above all, I have heard most disquieting stories told about her.  Around Ajaccio and Bonifacio, her bite is reputed very dangerous, sometimes mortal.  The countryman declares this for a fact and the doctor does not always dare deny it.  In the neighbourhood of Pujaud, not far from Avignon, the harvesters speak with dread of Theridion lugubre, first observed by Léon Dufour in the Catalonian mountains; according to them, her bite would lead to serious accidents.  The Italians have bestowed a bad reputation on the Tarantula, who produces convulsions and frenzied dances in the person stung by her.  To cope with ‘tarantism,’ the name given to the disease that follows on the bite of the Italian Spider, you must have recourse to music, the only efficacious remedy, so they tell us.  Special tunes have been noted, those quickest to afford relief.  There is medical choreography, medical music.  And have we not the tarentella, a lively and nimble dance, bequeathed to us perhaps by the healing art of the Calabrian peasant?

Must we take these queer things seriously or laugh at them?  From the little that I have seen, I hesitate to pronounce an opinion.  Nothing tells us that the bite of the Tarantula may not provoke, in weak and very impressionable people, a nervous disorder which music will relieve; nothing tells us that a profuse perspiration, resulting from a very energetic dance, is not likely to diminish the discomfort by diminishing the cause of the ailment.  So far from laughing, I reflect and enquire, when the Calabrian peasant talks to me of his Tarantula, the Pujaud reaper of his Theridion lugubre, the Corsican husbandman of his Malmignatte.  Those Spiders might easily deserve, at least partly, their terrible reputation....