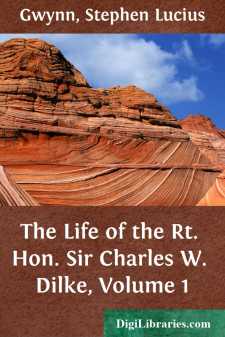 The following Life of Sir Charles W. Dilke consists mainly of his ownMemoirs and of correspondence left by him or furnished by his friends.

The Memoirs were compiled by Sir Charles Dilke from his private diaries and letters between the years 1888 and his return to Parliament in 1892. The private diaries consisted of entries made daily at the dates dealt with. Of the Memoirs he says: "These notes are bald, but I thought it best not to try, as the phrase goes, 'to write them up.'" In some cases the Memoirs have been condensed into narrative, for Sir Charles says of the periods his "notes" cover: "These chapters contain everything that can be used, and more than is needed, and changes should be by way of 'boiling down.'" The Memoirs were unfinished. He writes in May, 1893: "From this time forward I shall not name my speeches and ordinary action in the House, as I had now regained the position which I held up to 1878, though not my position of 1878-1880, nor that of 1884-85;" and as from this point onwards there are few entries, chapters treating of his varied activities have been contributed by those competent to deal with them.

Sir Charles Dilke's will, after giving full discretionary powers to his literary executrix, contains these words: "I would suggest that, as regards those parts relating to Ireland, Egypt, and South Africa, the same shall be made use of (if at all) without editing, as they have been agreed to by a Cabinet colleague chiefly concerned." A further note shows that, so far as Ireland was concerned, the years 1884-85 cover the dates to which Sir Charles Dilke alludes. The part of the Memoirs dealing with these subjects has therefore been printed in extenso, except in the case of some detailed portions of a discussion on Egyptian finance.

The closing words of this part of Sir Charles Dilke's will point out to his executrix that "it would be inconsistent with my lifelong views that she should seek assistance in editing from anyone closely connected with either the Liberal or Conservative party, so as to import into the publications any of the conventional attitude of the old parties. The same objection will not apply to members of the other parties." In consequence of this direction, Mr. Stephen Gwynn, M.P., whose name was among those suggested by Sir Charles Dilke, was asked to undertake the work of arranging the Memoirs, and supplementing them where necessary. This work was already far advanced when Mr. Gwynn joined the British forces on the outbreak of the War. His able and sympathetic assistance was thus withdrawn from the work entailed in the final editing of this book—a work which has occupied the Editor until going to press.

A deep debt of gratitude is due to Mr. Spenser Wilkinson, who has contributed the chapters on "The British Army" and "Imperial Defence." Sir George Askwith was good enough, amidst almost overwhelming pressure of public duties, to read and revise the chapter entitled "The Turning- Point." Sir George Barnes and Sir John Mellor have also freely given expert advice and criticism....