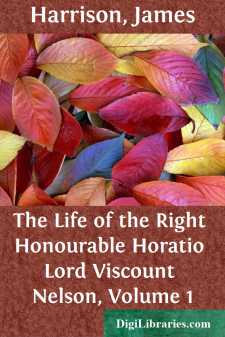 There are few works, the authors of which can possibly be permitted to recommend them as worthy of universal regard, without the imputation of intolerable vanity; an imputation little likely to be diminished by the consideration, that other writers, over whom a decided preference is claimed, may have previously occupied the same subject.

A Life of Lord Nelson, however, replete with original anecdotes, many of them from the mouths of his lordship's nearest and dearest relatives and friends, with whom the author has, for many months, been honoured with an almost constant communication; and abounding in a profusion of interesting letters, and extracts of letters, written by the hero himself, which have generously flowed in, from all quarters, to aid the biographer; he may surely, without the charge of presumption, these facts being self-evident on the slightest inspection, be allowed to assert, must necessarily be entitled to very general notice and esteem.

So numerous, indeed, have been the invaluable documents kindly tendered to the author's acceptance, that he has not only been under the necessity of greatly enlarging his original design; but may, probably, at a future and no very distant period, feel encouraged to present those who have so indulgently expressed their approbation of his present labours, with a sort of supplementary work, not necessarily attached, but still more minutely illustrative of many circumstances which relate to the life and character of this greatest and best of heroes and of men.

It is not without painful sensations, that the author feels compelled to notice the many dishonourable insinuations which have been promulged by bold speculators on public credulity: some of whom, by prematurely publishing, have already sufficiently evinced their want of genuine information; and others, after the most illiberal reflections on all contemporaries, have found it expedient entirely to abandon their own boasted performances, or to wait the completion of the very work which they have thus meanly and insidiously laboured to depreciate, before they could possibly advance.

This biographical memoir, like the character of the immortal man whom it proudly aspires to commemorate, rests on no false claim. It offers not any meretricious attraction to the eye; it submits itself, wholly, to the understanding, and to the heart. Should it fail considerably to gratify the one, and powerfully to interest the other, it will be in vain for the author to urge, however true, that he has exerted himself, with a due sense of the dignity of his subject, and of the difficulty of the task, to produce a work which, though it can never sufficiently honour the incomparable hero, should as little as possible disgrace the kind contributory aids, and the generous patronage, which he has had the distinguished favour to receive from so many estimable and illustrious personages. To add a list of names, might seem ostentatious; but, certainly, such a list would contain almost every great and virtuous character allied to his late lordship, in the bonds of affinity as well as of friendship....