The Life of Sir James Fitzjames Stephen, Bart., K.C.S.I. A Judge of the High Court of Justice 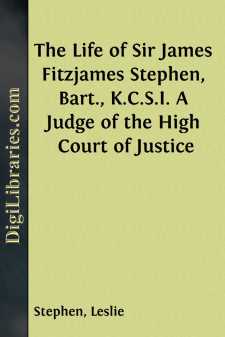 In writing the following pages I have felt very strongly one disqualification for my task. The life of my brother, Sir J. F. Stephen, was chiefly devoted to work which requires some legal knowledge for its full appreciation. I am no lawyer; and I should have considered this fact to be a sufficient reason for silence, had it been essential to give any adequate estimate of the labours in question. My purpose, however, is a different one. I have wished to describe the man rather than to give any history of what he did. What I have said of the value of his performances must be taken as mainly a judgment at second hand. But in writing of the man himself I have advantages which, from the nature of the case, are not shared by others. For more than sixty years he was my elder brother; and a brother in whose character and fortunes I took the strongest interest from the earliest period at which I was capable of reflection or observation. I think that brothers have generally certain analogies of temperament, intellectual and moral, which enable them, however widely they may differ in many respects, to place themselves at each other's point of view, and to be so far capable of that sympathetic appreciation which is essential to satisfactory biography. I believe that this is true of my brother and myself. Moreover, as we were brought up under the same roof, I have an intimate knowledge—now, alas! almost peculiar to myself—of the little home circle whose characteristics had a profound influence upon his development. I have thought it desirable to give a fuller account of those characteristics, and of their origin in previous circumstances, than can well be given by any one but myself. This is partly because I recognise the importance of the influence exerted upon him; and partly, I will admit, for another reason. My brother took a great interest, and, I may add, an interest not unmixed with pride, in our little family history. I confess that I share his feelings, and think, at any rate, that two or three of the persons of whom I have spoken deserve a fuller notice than has as yet been made public. What I have said may, I hope, serve as a small contribution to the history of one of the rivulets which helped to compose the great current of national life in the earlier part of this century.

I could not have attempted to write the life of my brother without the approval and the help of my sister-in-law, Lady Stephen. She has provided me with materials essential to the narrative, and has kindly read what I have written. I am, of course, entirely responsible for everything that is here said; and I feel the responsibility all the more because I have had the advantage of her suggestions throughout. I have also to thank my brother's children, who have been in various ways very helpful. My nephews, in particular, have helped me in regard to various legal matters. To my sister, Miss Stephen, I owe a debt of gratitude which—for reasons which she will understand—I shall not attempt to discharge by any full acknowledgment.

I have especially to thank Sir H. S. Cunningham and Lady Egerton, Lady Stephen's brother and sister, for permitting me to read my brother's letters to them, and for various suggestions. Some other correspondence has been placed in my hands, and especially two important collections. Lady Grant Duff has been good enough to show me a number of letters written to her, and Lady Lytton has communicated letters written to the late Lord Lytton. I have spoken of these letters in the text, and have in the last chapter given my reasons for confining my use of them to occasional extracts. They have been of material service.

I have acknowledged help received from other persons at the points where it has been turned to account. I will, however, offer my best thanks to them in this place, and assure them of my sincere gratitude. Mr. Arthur Coleridge, the Rev. Dr. Kitchin, dean of Durham, the Rev. H. W. Watson, rector of Berkeswell, Coventry, the Rev. J. Llewelyn Davies, vicar of Kirkby Lonsdale, Prof. Sidgwick and Mr. Montagu S. D. Butler, of Pembroke College, Cambridge, have given me information in regard to early years....