The Life of Napoleon I (Complete) 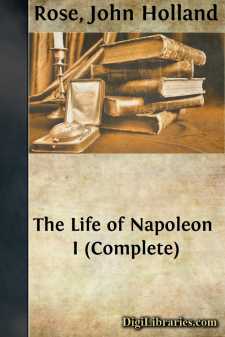 Add to My Favorites
Published: 9 years ago
Downloads: 103
Rating: (0 Votes)

CHAPTER I PARENTAGE AND EARLY YEARS

"I was born when my country was perishing. Thirty thousand French vomited upon our coasts, drowning the throne of Liberty in waves of blood, such was the sight which struck my eyes." This passionate utterance, penned by Napoleon Buonaparte at the beginning of the French Revolution, describes the state of Corsica in his natal year. The words are instinct with the vehemence of the youth and the extravagant sentiment of the age: they strike the keynote of his career. His life was one of strain and stress from his cradle to his grave.

In his temperament as in the circumstances of his time the young Buonaparte was destined for an extraordinary career. Into a tottering civilization he burst with all the masterful force of an Alaric. But he was an Alaric of the south, uniting the untamed strength of his island kindred with the mental powers of his Italian ancestry. In his personality there is a complex blending of force and grace, of animal passion and mental clearness, of northern common sense with the promptings of an oriental imagination; and this union in his nature of seeming opposites explains many of the mysteries of his life. Fortunately for lovers of romance, genius cannot be wholly analyzed, even by the most [pg.2] adroit historical philosophizer or the most exacting champion of heredity. But in so far as the sources of Napoleon's power can be measured, they may be traced to the unexampled needs of mankind in the revolutionary epoch and to his own exceptional endowments. Evidently, then, the characteristics of his family claim some attention from all who would understand the man and the influence which he was to wield over modern Europe.

It has been the fortune of his House to be the subject of dispute from first to last. Some writers have endeavoured to trace its descent back to the Cæsars of Rome, others to the Byzantine Emperors; one genealogical explorer has tracked the family to Majorca, and, altering its name to Bonpart, has discovered its progenitor in the Man of the Iron Mask; while the Duchesse d'Abrantès, voyaging eastwards in quest of its ancestors, has confidently claimed for the family a Greek origin. Painstaking research has dispelled these romancings of historical trouveurs, and has connected this enigmatic stock with a Florentine named "William, who in the year 1261 took the surname of Bonaparte or Buonaparte. The name seems to have been assumed when, amidst the unceasing strifes between Guelfs and Ghibellines that rent the civic life of Florence, William's party, the Ghibellines, for a brief space gained the ascendancy. But perpetuity was not to be found in Florentine politics; and in a short time he was a fugitive at a Tuscan village, Sarzana, beyond the reach of the victorious Guelfs. Here the family seems to have lived for wellnigh three centuries, maintaining its Ghibelline and aristocratic principles with surprising tenacity. The age was not remarkable for the virtue of constancy, or any other virtue....