The Life of Michelangelo Buonarroti 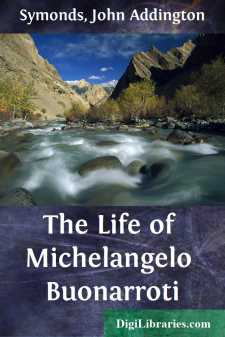 The Buonarroti Simoni, to whom Michelangelo belonged, were a Florentine family of ancient burgher nobility. Their arms appear to have been originally "azure two bends or." To this coat was added "a label of four points gules inclosing three fleur-de-lys or." That augmentation, adopted from the shield of Charles of Anjou, occurs upon the scutcheons of many Guelf houses and cities. In the case of the Florentine Simoni, it may be ascribed to the period when Buonarrota di Simone Simoni held office as a captain of the Guelf party (1392). Such, then, was the paternal coat borne by the subject of this Memoir. His brother Buonarroto received a further augmentation in 1515 from Leo X., to wit: "upon a chief or, a pellet azure charged with fleur-de-lys or, between the capital letters L. and X." At the same time he was created Count Palatine. The old and simple bearing of the two bends was then crowded down into the extreme base of the shield, while the Angevine label found room beneath the chief.

According to a vague tradition, the Simoni drew their blood from the high and puissant Counts of Canossa. Michelangelo himself believed in this pedigree, for which there is, however, no foundation in fact, and no heraldic corroboration. According to his friend and biographer Condivi, the sculptor's first Florentine ancestor was a Messer Simone dei Conti di Canossa, who came in 1250 as PodestГѓ  to Florence. "The eminent qualities of this man gained for him admission into the burghership of the city, and he was appointed captain of a Sestiere; for Florence in those days was divided into Sestieri, instead of Quartieri, as according to the present usage." Michelangelo's contemporary, the Count Alessandro da Canossa, acknowledged this relationship. Writing on the 9th of October 1520, he addresses the then famous sculptor as "honoured kinsman," and gives the following piece of information: "Turning over my old papers, I have discovered that a Messere Simone da Canossa was PodestГѓ  of Florence, as I have already mentioned to the above-named Giovanni da Reggio." Nevertheless, it appears now certain that no Simone da Canossa held the office of PodestГѓ  at Florence in the thirteenth century. The family can be traced up to one Bernardo, who died before the year 1228. His grandson was called Buonarrota, and the fourth in descent was Simone. These names recur frequently in the next generations. Michelangelo always addressed his father as "Lodovico di Lionardo di Buonarrota Simoni," or "Louis, the son of Leonard, son of Buonarrota Simoni;" and he used the family surname of Simoni in writing to his brothers and his nephew Lionardo. Yet he preferred to call himself Michelangelo Buonarroti; and after his lifetime Buonarroti became fixed for the posterity of his younger brother. "The reason," says Condivi, "why the family in Florence changed its name from Canossa to Buonarroti was this: Buonarroto continued for many generations to be repeated in their house, down to the time of Michelangelo, who had a brother of that name; and inasmuch as several of these Buonarroti held rank in the supreme magistracy of the republic, especially the brother I have just mentioned, who filled the office of Prior during Pope Leo's visit to Florence, as may be read in the annals of that city, this baptismal name, by force of frequent repetition, became the cognomen of the whole family; the more easily, because it is the custom at Florence, in elections and nominations of officers, to add the Christian names of the father, grandfather, great-grandfather, and sometimes even of remoter ancestors, to that of each citizen....