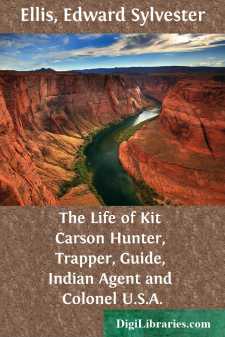 CHAPTER I. Kit Carson's Youth—His Visit to New Mexico—Acts as Interpreter and inVarious Other Employments—Joins a Party of Trappers and Engages in aFight with Indians—Visits the Sacramento Valley.

"Kit Carson," the most famous hunter, scout and guide ever known in this country, was a native of Kentucky, the scene of the principal exploits of Daniel Boone, Simon Kenton, the Wetzel brothers and other heroic pioneers whose names are identified with the history of the settlement of the West.

Christopher Carson was born in Madison county, December 24, 1809, and, while he was still an infant, his father removed to Central Missouri, which at that day was known as Upper Louisiana. It was an immense wilderness, sparsely settled and abounding with wild animals and treacherous Indians. The father of Carson, like most of the early pioneers, divided his time between cultivating the land and hunting the game in the forests. His house was made strong and was pierced with loopholes, so as to serve him in his defence against the red men that were likely to attack him and his family at any hour of the day or night. In such a school was trained the wonderful scout, hunter and guide.

No advantages in the way of a common school education were within reach of the youth situated as was Kit Carson. It is to be believed, however, that under the tutelage of his father and mother, he picked up a fair knowledge of the rudimentary branches, for his attainments in that respect were above the majority of those with whom he was associated in after life.

While a mere stripling, Kit became known as one of the most skilful rifle shots in that section of Missouri which produced some of the finest marksmen in the world. It was inevitable that he should form a passion for the woods, in which, like the great Boone, he would have been happy to wander for days and weeks at a time.

When fifteen years old, he was apprenticed to a saddler, where he stayed two years. At the end of that time, however, the confinement had become so irksome that he could stand it no longer. He left the shop and joined a company of traders, preparing to start for Santa Fe, the capital of New Mexico, one of the most interesting towns in the southwest. The majority of its population are of Spanish and Mexican origin and speak Spanish. It is the centre of supplies for the surrounding country, and is often a scene of great activity. It stands on a plateau, more than a mile above the sea level, with another snow capped mountain rising a mile higher. The climate is delightful and the supply of water from the springs and mountains is of the finest quality.

Santa Fe, when first visited by the Spaniards in 1542, was a populous Indian pueblo. It has been the capital of New Mexico for nearly two hundred and fifty years. The houses of the ancient town are made of adobe, one story high, and the streets are unpaved, narrow, crooked and ill looking. The inhabitants are of a low order, scarcely entitled to be ranked above the half civilized, though of late years the infusion of western life and rugged civilization has given an impetus and character to the place for which, through three centuries, it waited in vain....