The Life of Jesus of Nazareth 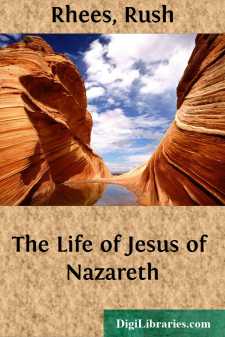 I The Historical Situation

1. When Tacitus, the Roman historian, records the attempt of Nero to charge the Christians with the burning of Rome, he has patience for no more than the cursory remark that the sect originated with a Jew who had been put to death in Judea during the reign of Tiberius. This province was small and despised, and Tacitus could account for the influence of the sect which sprang thence only by the fact that all that was infamous and abominable flowed into Rome. The Roman's scornful judgment failed to grasp the nature and power of the movement whose unpopularity invited Nero's lying accusation, yet it emphasizes the significance of him who did "not strive, nor cry, nor cause his voice to be heard in the street," whose influence, nevertheless, was working as leaven throughout the empire.

2. Palestine was not under immediate Roman rule when Jesus was born. Herod the Great was drawing near the close of the long reign during which, owing to his skill in securing Roman favor, he had tyrannized over his unwilling people. His claim was that of an adventurer who had power to succeed, even as his method had been that of a suspicious tyrant, who murdered right and left, lest one of the many with better right than he should rise to dispute with him his throne. When Herod died, his kingdom was divided into three parts, and Rome asserted a fuller sovereignty, allowing none of his sons to take his royal title. Herod's successors ruled with a measure of independence, however, and followed many of their father's ways, though none of them had his ability. The best of them was Philip, who had the territory farthest from Jerusalem, and least related to Jewish life. He ruled over Iturea and Trachonitis, the country to the north and east of the Sea of Galilee, having his capital at Cæsarea Philippi, a city built and named by him on the site of an older town near the sources of the Jordan. He also rebuilt the city of Bethsaida, at the point where the Jordan flows into the Sea of Galilee, calling it Julias, after the daughter of Augustus. Philip enters the story of the life of Jesus only as the ruler of these towns and the intervening region, and as husband of Salome, the daughter of Herodias. Living far from Jerusalem and the Jewish people, he abandoned even the show of Judaism which characterized his father, and lived as a frank heathen in his heathen capital.

3. The other two who inherited Herod's dominion were brothers, Archelaus and Antipas, sons of Malthace, one of Herod's many wives. Archelaus had been designated king by Herod, with Judea, Samaria, and Idumea as his kingdom; but the emperor allowed him only the territory, with the title ethnarch. Antipas was named a tetrarch by Herod, and his territory was Galilee and the land east of the Jordan to the southward of the Sea of Galilee, called Perea. Antipas was the Herod under whose sway Jesus lived in Galilee, and who executed John the Baptist. He was a man of passionate temper, with the pride and love of luxury of his father. Having Jews to govern, he held, as his father had done, to a show of Judaism, though at heart he was as much of a pagan as Philip. He, too, loved building, and Tiberias on the Sea of Galilee was built by him for his capital. His unscrupulous tyranny and his gross disregard of common righteousness appear in his relations with John the Baptist and with Herodias, his paramour. Jesus described him well as "that fox" (Luke xiii. 32), for he was sly, and worked often by indirection. While his father had energy and ability which command a sort of admiration, Antipas was not only bad but weak.

4. Both Philip and Antipas reigned until after the death of Jesus, Philip dying in A.D. 34, and Antipas being deposed several years later, probably in 39. Archelaus had a much shorter rule, for he was deposed in A.D. 6, having been accused by the Jews of unbearable barbarity and tyranny,--a charge in which Antipas and Philip joined. The territory of Archelaus was then made an imperial province of the second grade, ruled by a procurator appointed from among the Roman knights. In provinces under an imperial legate (propraetor) the procurator was an officer for the administration of the revenues; in provinces of the rank of Judea he was, however, the representative of the emperor in all the prerogatives of government, having command of the army, and being the final resort in legal procedure, as well as supervising the collection of the customs and taxes....