The Life of Froude 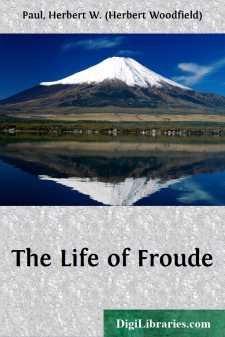 IN reading biographies I always skip the genealogical details. To be born obscure and to die famous has been described as the acme of human felicity. However that may be, whether fame has anything to do with happiness or no, it is a man himself, and not his ancestors, whose life deserves, if it does deserve, to be written. Such was Froude's own opinion, and it is the opinion of most sensible people. Few, indeed, are the families which contain more than one remarkable figure, and this is the rock upon which the hereditary principle always in practice breaks. For human lineage is not subject to the scientific tests which alone could give it solid value as positive or negative evidence. There is nothing to show from what source, other than the ultimate source of every good and perfect gift, Froude derived his brilliant and splendid powers. He was a gentleman, and he did not care to find or make for himself a pedigree. He knew that the Froudes had been settled in Devonshire time out of mind as yeomen with small estates, and that one of them, to whom his own father always referred with contempt, had bought from the Heralds' College what Gibbon calls the most useless of all coats, a coat of arms. Froude's grandfather did a more sensible thing by marrying an heiress, a Devonshire heiress, Miss Hurrell, and thereby doubling his possessions. Although he died before he was five-and-twenty, he left four children behind him, and his only son was the historian's father.

James Anthony Froude, known as Anthony to those who called him by his Christian name, was born at Dartington, two miles from Totnes, on St. George's Day, Shakespeare's birthday, the 23rd of April, 1818. His father, who had taken a pass degree at Oxford, and had then taken orders, was by that time Rector of Dartington and Archdeacon of Totnes. Archdeacon Froude belonged to a type of clergyman now almost extinct in the Church of England, though with strong idiosyncrasies of his own. Orthodox without being spiritual, he was a landowner as well as a parson, a high and dry Churchman, an active magistrate, a zealous Tory, with a solid and unclerical income of two or three thousand a year. He was a personage in the county, as well as a dignitary of the Church. Every one in Devonshire knew the name of Froude, if only from "Parson Froude," no credit to his cloth, who appears as Parson Chowne in Blackmore's once popular novel, The Maid of Sker. But the Archdeacon was a man of blameless life, and not in the least like Parson Froude. A hard rider and passionately fond of hunting, he was a good judge of a horse and usually the best mounted man in the field. One of his exploits as an undergraduate was to jump the turnpike gate on the Abingdon road with pennies under his seat, between his knees and the saddle, and between his feet and the stirrups, without dropping one.

Although he had been rather extravagant and something of a dandy, he was able to say that he could account for every sixpence he spent after the age of twenty-one....