The Life of Flavius Josephus 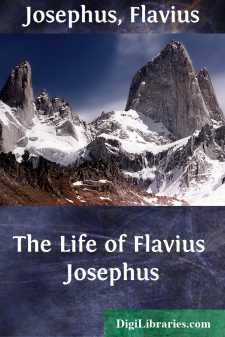 Add to My Favorites
Published: 8 years ago
Downloads: 49
Rating: (0 Votes)

1. The family from which I am derived is not an ignoble one, but hath descended all along from the priests; and as nobility among several people is of a different origin, so with us to be of the sacerdotal dignity, is an indication of the splendor of a family. Now, I am not only sprung from a sacerdotal family in general, but from the first of the twenty-four courses; and as among us there is not only a considerable difference between one family of each course and another, I am of the chief family of that first course also; nay, further, by my mother I am of the royal blood; for the children of Asamoneus, from whom that family was derived, had both the office of the high priesthood, and the dignity of a king, for a long time together. I will accordingly set down my progenitors in order. My grandfather's father was named Simon, with the addition of Psellus: he lived at the same time with that son of Simon the high priest, who first of all the high priests was named Hyrcanus. This Simon Psellus had nine sons, one of whom was Matthias, called Ephlias: he married the daughter of Jonathan the high priest, which Jonathan was the first of the sons of Asamoneus, who was high priest, and was the brother of Simon the high priest also. This Matthias had a son called Matthias Curtus, and that in the first year of the government of Hyrcanus: his son's name was Joseph, born in the ninth year of the reign of Alexandra: his son Matthias was born in the tenth year of the reign of Archclaus; as was I born to Matthias in the first year of the reign of Caius Caesar. I have three sons: Hyrcanus, the eldest, was born in the fourth year of the reign of Vespasian, as was Justus born in the seventh, and Agrippa in the ninth. Thus have I set down the genealogy of my family as I have found it described in the public records, and so bid adieu to those who calumniate me [as of a lower original].

2. Now, my father Matthias was not only eminent on account of is nobility, but had a higher commendation on account of his righteousness, and was in great reputation in Jerusalem, the greatest city we have. I was myself brought up with my brother, whose name was Matthias, for he was my own brother, by both father and mother; and I made mighty proficiency in the improvements of my learning, and appeared to have both a great memory and understanding. Moreover, when I was a child, and about fourteen years of age, I was commended by all for the love I had to learning; on which account the high priests and principal men of the city came then frequently to me together, in order to know my opinion about the accurate understanding of points of the law. And when I was about sixteen years old, I had a mind to make trim of the several sects that were among us. These sects are three:— The first is that of the Pharisees, the second that Sadducees, and the third that of the Essens, as we have frequently told you; for I thought that by this means I might choose the best, if I were once acquainted with them all; so I contented myself with hard fare, and underwent great difficulties, and went through them all. Nor did I content myself with these trials only; but when I was informed that one, whose name was Banus, lived in the desert, and used no other clothing than grew upon trees, and had no other food than what grew of its own accord, and bathed himself in cold water frequently, both by night and by day, in order to preserve his chastity, I imitated him in those things, and continued with him three years. So when I had accomplished my desires, I returned back to the city, being now nineteen years old, and began to conduct myself according to the rules of the sect of the Pharisees, which is of kin to the sect of the Stoics, as the Greeks call them.

3. But when I was in the twenty-sixth year of my age, it happened that I took a voyage to Rome, and this on the occasion which I shall now describe. At the time when Felix was procurator of Judea there were certain priests of my acquaintance, and very excellent persons they were, whom on a small and trifling occasion he had put into bonds, and sent to Rome to plead their cause before Caesar. These I was desirous to procure deliverance for, and that especially because I was informed that they were not unmindful of piety towards God, even under their afflictions, but supported themselves with figs and nuts. Accordingly I came to Rome, though it were through a great number of hazards by sea; for as our ship was drowned in the Adriatic Sea, we that were in it, being about six hundred in number, swam for our lives all the night; when, upon the first appearance of the day, and upon our sight of a ship of Cyrene, I and some others, eighty in all, by God's providence, prevented the rest, and were taken up into the other ship. And when I had thus escaped, and was come to Dieearchia, which the Italians call Puteoli, I became acquainted with Aliturius, an actor of plays, and much beloved by Nero, but a Jew by birth; and through his interest became known to Poppea, Caesar's wife, and took care, as soon as possible, to entreat her to procure that the priests might be set at liberty....