The Life of Cicero Volume One 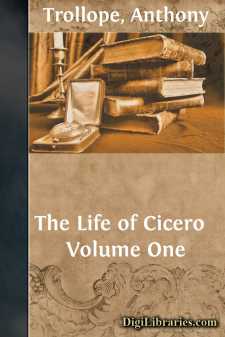 I am conscious of a certain audacity in thus attempting to give a further life of Cicero which I feel I may probably fail in justifying by any new information; and on this account the enterprise, though it has been long considered, has been postponed, so that it may be left for those who come after me to burn or publish, as they may think proper; or, should it appear during my life, I may have become callous, through age, to criticism.

The project of my work was anterior to the life by Mr. Forsyth, and was first suggested to me as I was reviewing the earlier volumes of Dean Merivale's History of the Romans under the Empire. In an article on the Dean's work, prepared for one of the magazines of the day, I inserted an apology for the character of Cicero, which was found to be too long as an episode, and was discarded by me, not without regret. From that time the subject has grown in my estimation till it has reached its present dimensions.

I may say with truth that my book has sprung from love of the man, and from a heartfelt admiration of his virtues and his conduct, as well as of his gifts. I must acknowledge that in discussing his character with men of letters, as I have been prone to do, I have found none quite to agree with me. His intellect they have admitted, and his industry; but his patriotism they have doubted, his sincerity they have disputed, and his courage they have denied. It might have become me to have been silenced by their verdict; but I have rather been instigated to appeal to the public, and to ask them to agree with me against my friends. It is not only that Cicero has touched all matters of interest to men, and has given a new grace to all that he has touched; that as an orator, a rhetorician, an essayist, and a correspondent he was supreme; that as a statesman he was honest, as an advocate fearless, and as a governor pure; that he was a man whose intellectual part always dominated that of the body; that in taste he was excellent, in thought both correct and enterprising, and that in language he was perfect. All this has been already so said of him by other biographers. Plutarch, who is as familiar to us as though he had been English, and Middleton, who thoroughly loved his subject, and latterly Mr. Forsyth, who has struggled to be honest to him, might have sufficed as telling us so much as that. But there was a humanity in Cicero, a something almost of Christianity, a stepping forward out of the dead intellectualities of Roman life into moral perceptions, into natural affections, into domesticity, philanthropy, and conscious discharge of duty, which do not seem to have been as yet fully appreciated. To have loved his neighbor as himself before the teaching of Christ was much for a man to achieve; and that he did this is what I claim for Cicero, and hope to bring home to the minds of those who can find time for reading yet another added to the constantly increasing volumes about Roman times.

It has been the habit of some latter writers, who have left to Cicero his literary honors, to rob him of those which had been accorded to him as a politician....