The Life of Cesare Borgia 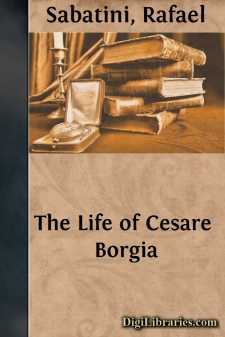 This is no Chronicle of Saints. Nor yet is it a History of Devils. It is a record of certain very human, strenuous men in a very human, strenuous age; a lustful, flamboyant age; an age red with blood and pale with passion at white-heat; an age of steel and velvet, of vivid colour, dazzling light and impenetrable shadow; an age of swift movement, pitiless violence and high endeavour, of sharp antitheses and amazing contrasts.

To judge it from the standpoint of this calm, deliberate, and correct century—as we conceive our own to be—is for sedate middle-age to judge from its own standpoint the reckless, hot, passionate, lustful humours of youth, of youth that errs grievously and achieves greatly.

So to judge that epoch collectively is manifestly wrong, a hopeless procedure if it be our aim to understand it and to be in sympathy with it, as it becomes broad-minded age to be tolerantly in sympathy with the youth whose follies it perceives. Life is an ephemeral business, and we waste too much of it in judging where it would beseem us better to accept, that we ourselves may come to be accepted by such future ages as may pursue the study of us.

But if it be wrong to judge a past epoch collectively by the standards of our own time, how much more is it not wrong to single out individuals for judgement by those same standards, after detaching them for the purpose from the environment in which they had their being? How false must be the conception of them thus obtained! We view the individuals so selected through a microscope of modern focus. They appear monstrous and abnormal, and we straight-way assume them to be monsters and abnormalities, never considering that the fault is in the adjustment of the instrument through which we inspect them, and that until that is corrected others of that same past age, if similarly viewed, must appear similarly distorted.

Hence it follows that some study of an age must ever prelude and accompany the study of its individuals, if comprehension is to wait upon our labours. To proceed otherwise is to judge an individual Hottentot or South Sea Islander by the code of manners that obtains in Belgravia or Mayfair.

Mind being the seat of the soul, and literature being the expression of the mind, literature, it follows, is the soul of an age, the surviving and immortal part of it; and in the literature of the Cinquecento you shall behold for the looking the ardent, unmoral, naïve soul of this Renaissance that was sprawling in its lusty, naked infancy and bellowing hungrily for the pap of knowledge, and for other things. You shall infer something of the passionate mettle of this infant: his tempestuous mirth, his fierce rages, his simplicity, his naïveté, his inquisitiveness, his cunning, his deceit, his cruelty, his love of sunshine and bright gewgaws.

To realize him as he was, you need but to bethink you that this was the age in which the Decamerone of Giovanni Boccaccio, the Facetiae of Poggio, the Satires of Filelfo, and the Hermaphroditus of Panormitano afforded reading-matter to both sexes....