The Life, Crime, and Capture of John Wilkes Booth 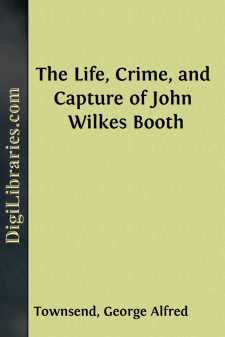 LETTER I. THE MURDER.

Some very deliberate and extraordinary movements were made by a handsome and extremely well-dressed young man in the city of Washington last Friday. At about half-past eleven o'clock A. M., this person, whose name is J. Wilkes Booth, by profession an actor, and recently engaged in oil speculations, sauntered into Ford's Theater, on Tenth, between E and F streets, and exchanged greetings with the man at the box-office. In the conversation which ensued, the ticket agent informed Booth that a box was taken for Mr. Lincoln and General Grant, who were expected to visit the theater, and contribute to the benefit of Miss Laura Keene, and satisfy the curiosity of a large audience. Mr. Booth went away with a jest, and a lightly-spoken "Good afternoon." Strolling down to Pumphreys' stable, on C street, in the rear of the National Hotel, he engaged a saddle horse, a high-strung, fast, beautiful bay mare, telling Mr. Pumphreys that he should call for her in the middle of the afternoon.

From here he went to the Kirkwood Hotel, on the corner of Pennsylvania avenue and Twelfth street, where, calling for a card and a sheet of notepaper, he sat down and wrote upon the first as follows:

I don't wish to disturb you; are you at home?

To this message, which was sent up by the obliging clerk, Mr. Johnson responded that he was very busily engaged. Mr. Booth smiled, and turning to his sheet of note-paper, wrote on it. The fact, if fact it is, that he had been disappointed in not obtaining an examination of the Vice-President's apartment and a knowledge of the Vice-President's probable whereabouts the ensuing evening, in no way affected his composure. The note, the contents of which are unknown, was signed and sealed within a few moments. Booth arose, bowed to an acquaintance, and passed into the street. His elegant person was seen on the avenue a few minutes, and was withdrawn into the Metropolitan Hotel.

At 4 P. M., he again appeared at Pumphreys' livery stable, mounted the mare he had engaged, rode leisurely up F street, turned into an alley between Ninth And Tenth streets, and thence into an alley reloading to the rear of Ford's Theater, which fronts on Tenth street, between E and F streets. Here he alighted and deposited the mare in a small stable off the alley, which he had hired sometime before for the accommodation of a saddle-horse which he had recently sold. Mr. Booth soon afterward retired from the stable, and is supposed to have refreshed himself at a neighboring bar-room.

At 8 o'clock the same evening, President Lincoln and Speaker Colfax sat together in a private room at the White House, pleasantly conversing. General Grant, with whom the President had engaged to attend Ford's Theater that evening, had left with his wife for Burlington, New-Jersey, in the 6 o'clock train. After this departure Mr. Lincoln rather reluctantly determined to keep his part of the engagement, rather than to disappoint his friends and the audience....