The Life and Adventures of Baron Trenck, Volume 1 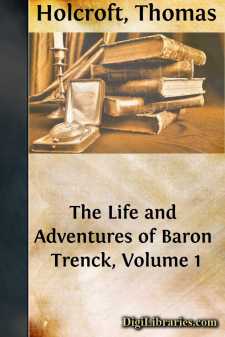 There were two cousins Von der Trenck, who were barons descended from an ancient house in East Prussia, and were adventurous soldiers, to whom, as to the adventurous, there were adventures that lost nothing in the telling, for they were told by the authors’ most admiring friends—themselves.  Franz, the elder, was born in 1711, the son of an Austrian general; and Frederick, whose adventures are here told, was the son of a Prussian major-general.  Franz, at the age of seventeen, fought duels, and cut off the head of a man who refused to lend him money.  He stood six feet three inches in his shoes, knocked down his commanding officer, was put under arrest, offered to pay for his release by bringing in three Turks’ heads within an hour, was released on that condition, and actually brought in four Turks’ heads.  When afterwards cashiered, he settled on his estates in Croatia, and drilled a thousand of his tenantry to act as “Pandours” against the banditti.  In 1740, he served with his Pandours under Maria Theresa, and behaved himself as one of the more brutal sort of banditti.  He offered to capture Frederick of Prussia, and did capture his tent.  Many more of his adventures are vaingloriously recounted by himself in the Mémoires du Baron Franz de Trenck, published at Paris in 1787.  This Trenck took poison when imprisoned at Grätz, and died in October, 1747, at the age of thirty-six.

His cousin Frederick is the Trenck who here tells a story of himself that abounds in lively illustration of the days of Frederick the Great.  He professes that Frederick the King owed him a grudge, because Frederick the Trenck had, when eighteen years old, fascinated the Princess Amalie at a ball.  But as Frederick the Greater was in correspondence with his cousin Franz at the time when that redoubtable personage was planning the seizure of Frederick the Great, there may have been better ground for the Trenck’s arrest than he allows us to imagine.  Mr. Carlyle shows that Frederick von der Trenck had been three months in prison, and was still in prison, at the time of the battle of the Sohr, in which he professes to have been engaged.  Frederick von der Trenck, after his release from imprisonment in 1763, married a burgomaster’s daughter, and went into business as a wine merchant.  Then he became adventurous again.  His adventures, published in German in 1786-7, and in his own French version in 1788, formed one of the most popular books of its time.  Seven plays were founded on them, and ladies in Paris wore their bonnets à la Trenck.  But the French finally guillotined the author, when within a year of threescore and ten, on the 26th of July, 1794.  He had gone to Paris in 1792, and joined there in the strife of parties.  At the guillotine he struggled with the executioner.

I was born at Königsberg in Prussia, February 16, 1726, of one of the most ancient families of the country.  My father, who was lord of Great Scharlach, Schakulack, and Meichen, and major-general of cavalry, died in 1740, after receiving eighteen wounds in the Prussian service.  My mother was daughter of the president of the high court at Königsberg.  After my father’s death she married Count Lostange, lieutenant-colonel in the Kiow regiment of cuirassiers, with whom she went and resided at Breslau.  I had two brothers and a sister; my youngest brother was taken by my mother into Silesia; the other was a cornet in this last-named regiment of Kiow; and my sister was married to the only son of the aged General Valdow....