The Library of Work and Play: Gardening and Farming. 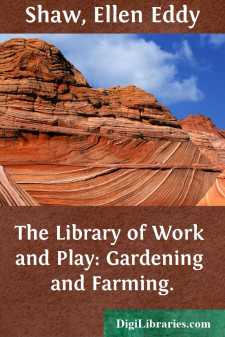 I THE GARDEN CLUB

The door opened. A gust of wind and rain literally swept five boys, wet and breathless, into the room. The man at the big oak table in front of a huge open fire looked up, smiled, and said, "Off with your duds, boys! Bar the door securely, Jay, for it's a wild night. Throw a fresh log on the fire, Albert. And all line up."

For a few moments the big cheerful room seemed full of wriggling, twisting boys as great coats were pulled off and hung up carefully on pegs at the far end of the room. It was a rule here at The Chief's home that things should always be shipshape. Then the "line up" came. This was a little ceremony the boys always went through, having dropped into it quite of their own accord. They formed a line in front of the open fire with backs to it and faces toward the man. Then they solemnly saluted in military style. At this The Chief arose, saluted, and by a wave of the hand assigned each boy to his place at the table.

This little group of boys had formed itself naturally into a club. It met with The Chief every Saturday night. He was really no chief, this big, boy-loving man who had come to spend a while in this little country village, to rest and to write. The boys had named him The Chief because, as Albert said, "He could lead any tribe and tame any savage." At this Albert always laughed for he himself had been called a savage so many times he almost believed he was one.

The boys dropped into their places. Jay, or the "Little Chief" as the boys called him, sat opposite the Big Chief at the end of the table and right in front of the fire. He was slim and tall and light of foot. He could run faster, throw farther, and play better than any other boy in the village. He always led, he never bullied, he played fair, so the other boys always followed.

Albert, Jay's brother, big and heavy and as full of mischief as he could hold, took his place at The Chief's right hand. Albert called this his place of honour although knowing full well that he was there so The Chief might have him within reach. Next to Albert came George, frank-faced and bashful, sturdy and loyal. Opposite him red-headed, stubby Peter sat always on the edge of his chair, always with a bit of a smile on his face, never talking much, always agreeing good-naturedly. Beside Peter and at The Chief's left was Jack, who wriggled constantly like a young eel.

After the boys were seated and quiet, The Chief pushed back his work, a plan of his summer's garden, leaned back in his chair and said, "I think first we had better take up your reports." Then he pointed at Jay who began: "Well, when Albert and I asked father for a piece of the garden for our very own to work exactly as we pleased this summer, with no questions asked or answered, he laughed. He said that Albert wouldn't stick to it a day."

"I will, just the same," shouted out Albert quite red in the face.

"Just keep out of this, Savage, until I get through."

The man laid a restraining hand on Albert's arm and Jay continued: "But I begged father, and told him we'd always worked for him, and he might let us try for ourselves....