The Library of William Congreve 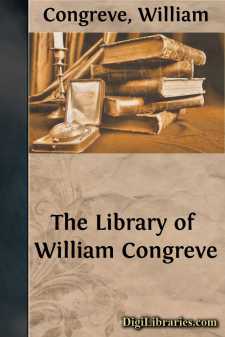 When William Congreve died in 1729 he left a collection of books which his old friend and publisher, Jacob Tonson, described (in a letter preserved at the Bodleian) as “genteel & well chosen.” Tonson thought so well of the collection that he urged his nephew, then his agent in London, to purchase Congreve’s books. But Congreve had willed them to Henrietta, the young Duchess of Marlborough, who was much concerned with keeping intact (as she wrote in her will) “all Mr. Congreaves Personal Estate that he left me” in order to pass it along to her youngest daughter Mary. This daughter, said by gossip to have been Congreve’s daughter also, married the fourth Duke of Leeds in 1740, and thus Congreve’s books eventually found their way to Hornby Castle, chief seat of the Leeds family in Yorkshire.

There apparently most of Congreve’s books remained until about 1930, when the eleventh Duke of Leeds sold his English estates and authorized Sotheby’s to auction off “a Selected portion of the Valuable Library at Hornby Castle.” Among the 713 items advertised for sale on June 2, 3, and 4, 1930, were ten books containing the signature of William Congreve. These ten, along with a few others that have been discovered here and there with Congreve’s name on the title page, and nine books published by subscription with Congreve’s name in the printed list of subscribers, made a total of some thirty-odd books known to have been in Congreve’s library. These, we may presume, were but a small part of the Congreve books which had been incorporated with the Leeds family library in 1740.

Finding and Identifying Congreve’s Book List and His Books

Among the voluminous papers of the Leeds family now stored in the British Museum, the Public Record Office, and several other depositories in England are at least a half-dozen manuscript lists or catalogues of Leeds books. In one list from the middle of the eighteenth century appear a few of the books known to have been in Congreve’s library. The same is true of lists dated 1810 and 1850. But it is impossible to use any of these to determine exactly which of the books had once been Congreve’s. Fortunately another manuscript list proves to be not a combination of Congreve and Leeds books but a separate catalogue of Congreve’s private library. This list, herewith printed, was found by the editor in an English county depository, the Yorkshire Archaeological Society in the City of Leeds.

Let us see why we may accept this list as Congreve’s and not simply another catalogue of Leeds family books—as the librarian of the Society had classified it. In the first place, it was found among the Leeds papers, in one of the sixteen boxes of manuscripts brought away from Hornby Castle shortly before it was torn down about 1930. Among the same papers, interestingly enough, is a copy of the marriage settlement (on the original parchment) whereby Mary Godolphin brought to the Leeds family the books which she had inherited through her mother from Congreve....