The Liberty Boys Running the Blockade or, Getting Out of New York 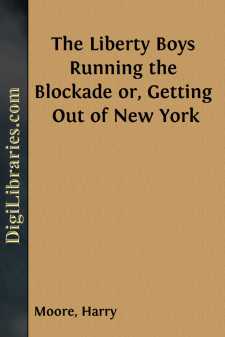 "I think that fellow is following us, Bob."

"The one on the other side of the way, the man with a beard and a steeple-crowned hat."

"To obtain information, I suppose. He is certainly watching and following us and if we were to stop anywhere you would see that he would do the same."

"Very well. I may get some information myself. There is Fraunces' tavern. That is as good as any place."

"Yes, for that is a general resort for army officers, and if this man is a spy, as you seem to think, he will be very likely to go to just such places."

The boys, well built and handsome, bronzed from exposure to the weather and wearing the uniform of the Continental army, were making their way along Wall street in the City of New York one pleasant September afternoon. Dick Slater was the captain and Bob Estabrook the first lieutenant of the Liberty Boys, a band of one hundred sterling young patriots engaged in the war for American independence, and at that time quartered in New York, on the Commons at the upper end of town.

As they were walking along Wall street, Dick, who was very observant, noticed a man on the opposite side of the street, who seemed to be watching them closely as if with an idea of learning what they knew, and following them wherever they went. At this time the city was threatened by the British, who held Long Island and had ships at Staten Island just across from Manhattan ready to proceed up the rivers at any time. The presence of British spies in the city was suspected, and Dick, who was an expert spy himself, had his suspicions concerning the man opposite as soon as he saw the fellow.

Turning into Broad Street, the boys walked down and at once the spy, if he were one, took the same direction. Fraunces tavern, on the corner of Broad and Pearl streets, was at that time a great resort for army officers and men-about-town, and was, therefore, just the place which the boys would frequent. Crossing the street when they reached Pearl street, the boys went into the tavern, and were shortly followed by the man in the steeple-crowned hat, who took a seat at a table near enough to understand all that they said.

Giving Bob a wink, Dick began talking about some supposed exploit with some one in the army, and went on from that to telling of meeting certain beautiful young ladies, and how the latter were so charmed with him and other boastful talk. The man was evidently greatly disgusted at having to listen to such talk, as he had evidently expected to hear something different, and he shortly moved his seat to another part of the room.

"He had no interest in hearing how Polly Perkins winked at you, Dick," laughed Bob.

"No, but he wants to find out more about us, nevertheless. Don't look over there. He has a very pretty scheme, I can see."

The man was drinking strong ale from a pewter and, having finished it, set the pewter down. Dick saw him scratch something on it and beckon almost imperceptably to a man near by who had just entered....