The Liberation of Italy 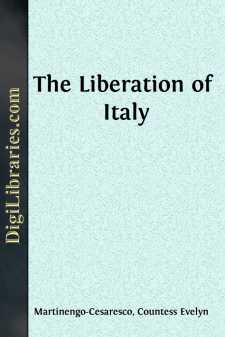 CHAPTER I RESURGAM Italy from the Battle of Lodi to the Congress of Vienna.

The unity of Italy, which the statesmen of Europe and all save a small number of the Italians themselves still regarded as an utopia when it was on the verge of accomplishment, was, nevertheless, desired and foreseen by the two greatest intellects produced by the Italian race. Dante conceived an Italy united under the Empire, which returning from a shameful because self-imposed exile would assume its natural seat in Rome. To him it was a point of secondary interest that the Imperial Lord happened to be bred beyond the Alps, that he was of Teutonic, not of Latin blood. If the Emperor brought the talisman of his authority to the banks of the Tiber, Italy would overcome the factions which rent her, and would not only rule herself, but lead mankind. Vast as the vision was, Dante cannot be called presumptuous for having entertained it. The Rome of the Cæsars, the Rome of the Popes, had each transformed the world: Italy was transforming it for a third time at that moment by the spiritual awakening which, beginning with the [Pg.2] Renaissance, led by inevitable steps to the Reformation. The great Florentine poet had the right to dream that his country was invested with a providential mission, that his people was a chosen people, which, by its own fault and by the fault of others, had lost its way, but would find it again. Such was Dante's so-called Ghibelline programme—less Ghibelline than intensely and magnificently Italian. His was a mind too mighty to be caged within the limits of partisan ambitions. The same may be said of Machiavelli. He also imagined, or rather discerned in the future, a regenerate Italy under a single head, and this, not the advancement of any particular man, was the grand event he endeavoured to hasten. With the impatience of a heart consumed by the single passion of patriotism, he conjured his fellow-countrymen to seize the first chance that presented itself, promising or unpromising, of reaching the goal. The concluding passage in the Principe was meant as an exhortation; it reads as a prophecy. 'We ought not therefore,' writes Machiavelli, 'to let this occasion pass whereby, after so long waiting, Italy may behold the coming of a saviour. Nor can I express with what love he would be received in all those provinces which have suffered from the foreign inundations; with what thirst of vengeance, with what obstinate faith, with what worship, with what tears! What doors would be closed against him? What people would deny him obedience? What jealousy would oppose him? What Italian would not do him honour? The barbarous dominion of the stranger stinks in the nostrils of all.'

Another man of genius, an Italian whom a fortuitous circumstance made the citizen and the master of a country not his own, grasped both the vital necessity of unity from an Italian point of view, and the certainty of its ultimate achievement. Napoleon's notes on the [Pg.3] subject, written at St Helena, sum up the whole question without rhetoric but with unanswerable logic:—'Italy is surrounded by the Alps and the sea....