The Letters of Robert Burns 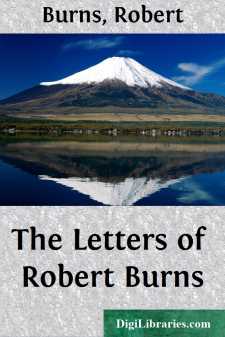 It is not perhaps generally known that the prose of Burns exceeds in quantity his verse. The world remembers him as a poet, and forgets or overlooks his letters. His place among the poets has never been denied—it is in the first rank; nor is he lowest, though little remembered, among letter-writers. His letters gave Jeffrey a higher opinion of him as a man than did his poetry, though on both alike the critic saw the seal and impress of genius. Dugald Stewart thought his letters objects of wonder scarcely less than his poetry. And Robertson, comparing his prose with his verse, thought the former the more extraordinary of the two. In the popular view of his genius there is, however, no denying the fact that his poetry has eclipsed his prose.

His prose consists mostly of letters, but it also includes a noble fragment of autobiography; three journals of observations made at Mossgiel, Edinburgh, and Ellisland respectively; two itineraries, the one of his border tour, the other of his tour in the Highlands; and historical notes to two collections of Scottish songs. A full enumeration of his prose productions would take account also of his masonic minutes, his inscriptions, a rather curious business paper drawn up by the poet-exciseman in prosecution of a smuggler, and of course his various prefaces, notably the dedication of his poems to the members of the Caledonian Hunt.

His letters, however, far exceed the sum of his other-prose writings. Close upon five hundred and forty have already been published. These are not all the letters he ever wrote. Where, for example, is the literary correspondence in which he engaged so enthusiastically with his Kirkoswald schoolfellows? "Though I had not three farthings' worth of business in the world, yet every post brought me as many letters as if I had been a broad-plodding son of daybook and ledger." Where are the letters which brought to the ploughman at Lochlie such a constant and copious stream of replies? The circumstances of his position will explain why they perished: he was then "a youth and all unknown to fame." It is even doubtful if the five hundred and forty published letters include all the letters of Burns that now exist. Scarcely a year passes but some epistolary scrap in the well-known handwriting is unearthed and ceremoniously added to the previous sum total, And yet, notwithstanding losses past or within recall, it is probable that we have long had the whole of Burns's most characteristic letters. It was inevitable that these should be preserved and published. His fame was so rooted in the popular regard in his lifetime, that a characteristic letter from his hand was sure to be received as something singularly precious. It must not be forgotten, however, that Burns's personality was so intense as to colour the smallest fragment of his correspondence, and it is on this account desirable that every note he penned that yet remains unpublished should be produced. It might give no new feature to our conception of his character; but it would help the shading—which, in the portraiture of any person, must chiefly be furnished by the minor and more commonplace actions of his everyday life....