The Letters of Horace Walpole, Earl of Orford - Volume 3 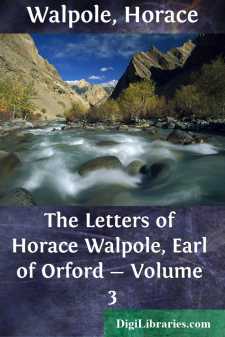 I rejoice over your brother's honours, though I certainly had no hand in them. He probably received his staff from the board of trade. If any part of the consequences could be placed to partiality for me, it would be the prevention of your coming to town, which I wished. My lady Cutts(1) is indubitably your own grandmother: the Trevors would once have had it, but by some misunderstanding the old Cowslade refused it. Mr. Chute has twenty more corroborating circumstances, but this one is sufficient.

Fred. Montagu told me of the pedigree. I shall take care of all your commissions. Felicitate yourself on having got from me the two landscapes; that source is stopped. Not that Mr. M`untz is eloped to finish the conquest of America, nor promoted by Mr. Secretary's zeal for my friends, nor because the ghost of Mrs. Leneve has appeared to me, and ordered me to drive Hannah and Ishmael into the wilderness. A cause much more familiar to me has separated US—nothing but a tolerable quantity of ingratitude on his side, both to me and Mr. Bentley. The story is rather too long for a letter: the substance was most extreme impertinence to me, concluded by an abusive letter against Mr. Bentley, who sent him from starving on seven pictures for a guinea to One hundred pounds a year, my house, table, and utmost countenance. In short, I turned his head, and was forced to turn him out of doors. You shall see the documents, as it is the fashion to call proof papers. Poets and painters imagine they confer the Honour when they are protected, and they set down impertinence to the article of their own virtue, when you dare to begin to think that an ode or a picture is not a patent for all manner of insolence.

My Lord Temple, as vain as if he was descended from the stroller Pindar, or had made up card-matches at the siege of Genoa, has resigned the privy seal, because he has not the garter.(2) You cannot imagine what an absolute prince I feel myself with knowing that nobody can force me to give the garter to M`untz.

My Lady Carlisle is going to marry a Sir William Musgrave, who is but three-and-twenty; but, in consideration of the match, and of her having years to spare, she has made him a present of ten, and calls them three-and-thirty. I have seen the new Lady Stanhope. I assure you her face will introduce no plebeian charms into the faces of the Stanhopes, Adieu!

(1) Lady Cutts was the mother of Mrs. Montagu, by her second husband, John Trevor, Esq. and grandmother of George Montagu.-E.

Sir, On coming to town, I did myself the honour of waiting on you and Lady Hester Pitt: and though I think myself extremely distinguished by your obliging note, I shall be sorry for having given you the trouble of writing it, if it did not lend me a very pardonable opportunity of saying what I much wished to express, but thought myself too private a person, and of too little consequence, to take the liberty to say....