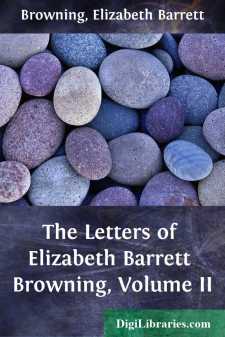 Since they first settled in Florence the Brownings had made no long or distant expeditions from their new home. Their summer excursions to Vallombrosa, Lucca, or Siena had been of the nature of short holidays, and had not taken them beyond the limits of Tuscany. Now they had planned a far wider series of travels, which, beginning with Rome, Naples, Venice, and Milan, should then be extended across the Alps, and comprehend Brussels, Paris, and ultimately London. This ambitious programme had to be curtailed by the omission of the southern tour to Rome and Naples, as well as the digression to Brussels, but the rest of the scheme was carried out, and about the beginning of June they left Casa Guidi for an absence which extended over seventeen months.

The holiday had been well earned, especially by Mrs. Browning, who, since the preparation of the new edition of her poems in the previous year, had been writing the second part of 'Casa Guidi Windows.' It is probably to this poem that she refers in the letter to Miss Browning printed at the end of the last chapter, Miss Browning having on more than one occasion helped both her brother and her sister-in-law in the task of passing their poems through the press. The book appeared in June, just as they were starting on their travels, and probably for this reason we hear less in the letters of its reception. It was hardly to be expected that the English public would take a very keen interest in a poem dealing almost entirely with Italian politics, and half of it with the politics of three years ago. Either in 1849 or in 1859 the interest would have been livelier; but Italy was passing now through the valley of the shadow, and, save for the horrors of the Neapolitan prisons, was not much before the public for the moment. The intrigues of Louis Napoleon and the ostentatious aggression of the Pope in England were the matters of most interest in foreign politics, and both were overshadowed by the absorbing topic of the Great Exhibition.

Another reason why 'Casa Guidi Windows' has received less appreciation than it deserves, both at the time of its publication and since, is that it stands rather apart from all the recognised species of poetry, and is hard to classify and criticise. Its political and contemporary character cut it off from the imaginative and historical subjects which form in general the matter of poetry, while its genuinely poetic emotion and language separate it from the political pamphlet or the occasional verse. It is a poetic treatment of a political subject raised to a high level by the genuine enthusiasm and fire with which it is inspired, and these give it a value which lasts far beyond the moment of the events which gave it birth. The execution, too, shows an advance on most of Mrs. Browning's previous work. The dangerous experiments in rhyming which characterised many of the poems in the volumes of 1844 are abandoned; the licences of language are less frequent; the verse runs smoothly and is more uniformly under command. It would appear as if the heat of inspiration which produced the 'Sonnets from the Portuguese' had left a permanent and purifying effect upon her style. The poem has been neglected by those who take little interest in Italy and its history, and adversely criticised by those who do not sympathise with its political and religious opinions; but with those who look only to its poetry and to its warm-hearted championship of a great cause, it will always hold a high place of its own among Mrs. Browning's writings.

To Miss I. Blagden

I am writing to you, dearest Miss Blagden, at last, you see; though you must have excommunicated me before now as the most ungrateful of correspondents and friends. Do forgive what you can—and your kindness is so great that I believe you can, and shall go on to write as if you did. We have been in the extremity of confusion and indecision. Remember how the fairy princes used to do when they arrived at the meeting of three roads, and had to consider what choice to make....