The Letters of Elizabeth Barrett Browning (1 of 2) 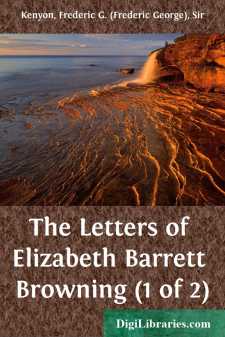 Elizabeth Barrett Barrett, still better known to the world as Elizabeth Barrett Browning, was born on March 6, 1806, the eldest child of Edward and Mary Moulton Barrett. I Both the date and place of her birth have been matters of uncertainty and dispute, and even so trustworthy an authority as the 'Dictionary of National Biography' is inaccurate with respect to them. All doubt has, however, been set at rest by the discovery of the entry of her birth in the parish register of Kelloe Church, in the county of Durham. She was born at Coxhoe Hall, the residence of Mr. Barrett's only brother, Samuel, about five miles south of the city of Durham. Her father, whose name was originally Edward Barrett Moulton, had assumed the additional surname of Barrett on the death of his maternal grandfather, to whose estates in Jamaica he was the heir. Of Mr. Barrett it is recorded by Mr. Browning, in the notes prefixed by him to the collected edition of his wife's poems, that 'on the early death of his father he was brought from Jamaica to England when a very young child, as a ward of the late Chief Baron Lord Abinger, then Mr. Scarlett, whom he frequently accompanied in his post-chaise when on circuit. He was sent to Harrow, but received there so savage a punishment for a supposed offence (burning the toast)'—which, indeed, has been a 'supposed offence' at other schools than Harrow—'by the youth whose fag he had become, that he was withdrawn from the school by his mother, and the delinquent was expelled. At the age of sixteen he was sent by Mr. Scarlett to Cambridge, and thence, for an early marriage, went to Northumberland.' His wife was Miss Mary Graham-Clarke, daughter of J. Graham-Clarke, of Fenham Hall, Newcastle-upon-Tyne, but of her nothing seems to be known, and her comparatively early death causes her to be little heard of in the record of her daughter's life.

Nothing is to be gained by trying to trace back the genealogy of the Barrett family, and it need merely be noted that it had been connected for some generations with the island of Jamaica, and owned considerable estates there. It is a curious coincidence that Robert Browning was likewise in part of West Indian descent, and so, too, was John Kenyon, the lifelong friend of both, by whose means the poet and poetess were first introduced to one another.

The family of Mr. Edward Barrett was a fairly large one, consisting, besides Elizabeth, of two daughters, Henrietta and Arabel, and eight sons—Edward, whose tragic death at Torquay saddened so much of his sister's life, Charles (the 'Stormie' of the letters), Samuel, George, Henry, Alfred, Septimus, and Octavius; Mr. Barrett's inventiveness having apparently given out with the last two members of his family, reducing him to the primitive method of simple enumeration, an enumeration in which, it may be observed, the daughters counted for nothing. Not many of these, however, can have been born at Coxhoe; for while Elizabeth was still an infant—apparently about the beginning of the year 1809—Mr....