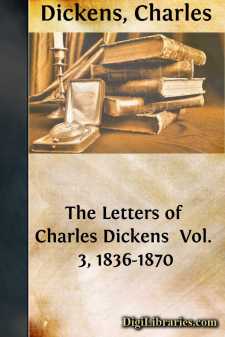 Have you seen The Examiner? It is rather depreciatory of the opera; but, like all inveterate critiques against Braham, so well done that I cannot help laughing at it, for the life and soul of me. I have seen The Sunday Times, The Dispatch, and The Satirist, all of which blow their critic trumpets against unhappy me most lustily. Either I must have grievously awakened the ire of all the "adapters" and their friends, or the drama must be decidedly bad. I haven't made up my mind yet which of the two is the fact.

I have not seen the John Bull or any of the Sunday papers except The Spectator. If you have any of them, bring 'em with you on Tuesday. I am afraid that for "dirty Cummins'" allusion to Hogarth I shall be reduced to the necessity of being valorous the next time I meet him.

Believe me, most faithfully yours. The same. Furnival's Inn, Monday Afternoon, 7 o'clock (1836). My Dear Hullah,

Mr. Hogarth has just been here, with news which I think you will be glad to hear. He was with Braham yesterday, who was far more full of the opera than he was; speaking highly of my works and "fame" (!), and expressing an earnest desire to be the first to introduce me to the public as a dramatic writer. He said that he intended opening at Michaelmas; and added (unasked) that it was his intention to produce the opera within one month of his first night. He wants a low comedy part introduced—without singing—thinking it will take with the audience; but he is desirous of explaining to me what he means and who he intends to play it. I am to see him on Sunday morning. Full particulars of the interview shall be duly announced.

Perhaps I shall see you meanwhile. I have only time to add that I am

Most faithfully yours. The same. Petersham, Monday Evening (1836). Dear Hullah,

Since I called on you this morning I have not had time to look over the words of "The Child and the Old Man." It occurs to me, as I shall see you on Wednesday morning, that the best plan will be for you to bring the music (if you possibly can) without the words, and we can put them in then. Of course this observation applies only to that particular song.

Braham having sent to me about the farce, I called on him this morning. Harley wrote, when he had read the whole of the opera, saying: "It's a sure card—nothing wrong there. Bet you ten pound it runs fifty nights. Come; don't be afraid. You'll be the gainer by it, and you mustn't mind betting; it's a capital custom." They tell the story with infinite relish. I saw the fair manageress, who is fully of Harley's opinion, so is Braham. The only difference is, that they are far more enthusiastic than Harley—far more enthusiastic than ourselves even. That is a bold word, isn't it? It is a true one, nevertheless.

"Depend upon it, sir," said Braham to Hogarth yesterday, when he went there to say I should be in town to-day, "depend upon it, sir, that there has been no such music since the days of Sheil, and no such piece since "The Duenna."" "Everybody is delighted with it," he added, to me to-day....