The Letter of the Contract 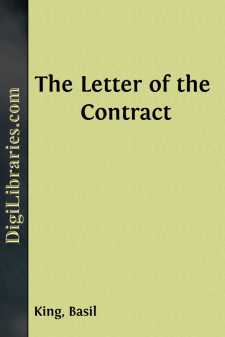 It was strange to think that if, on finishing her coffee in her room, she had looked in on the children, as she generally did, instead of going down to the drawing-room to write a note, her whole life might have been different. "Why didn't I?" was the question she often asked herself in the succeeding years, only to follow it with the reflection: "But perhaps it would have happened in any case. Since the fact was there, I must have come to know it—in the long run."

The note was an unimportant one. She could have sent it by a servant at any minute of the day. The very needlessness of writing it at once, so that her husband could post it as he went to his office, gave to the act something of the force of fate.

Everything that morning, when she came to think of it, had something of the force of fate. Why, on entering the drawing-room, hadn't she gone straight to her desk, according to her intention, if it wasn't that fate intervened? As a matter of fact, she went to the oriel window looking down into Fifth Avenue, with vague thoughts of the weather. It was one of those small Scotch corner windows that show you both sides of the street at once. It was so much the favorite conning-spot of the family that she advanced to it from habit.

And yet, if she had gone to her desk, that girl might have disappeared before the lines of the note were penned. As it was, the girl was there, standing as she had stood on other occasions—three or four, at least—between the two little iron posts that spaced off the opening for foot-passengers into the Park. She was looking up at the house in the way Edith had noticed before—not with the scrutiny of one who wishes to see, but with the forlorn patience of the unobtrusive creature hoping to be seen.

In a neat gray suit of the fashion of 1904 and squirrel furs she was the more unobtrusive because of a background of light snow. She was pathetically unobtrusive. Not that she seemed poor; she suggested, rather, some one lost or dazed or partially blotted out. People glanced at her as they hurried by. There were some who turned and glanced a second time. She might have been a person with a sorrow—a love-sorrow. At that thought Edith's heart went out to her in sympathy. She herself was so happy, with a happiness that had grown more intense each month, each week, each day, of her six years of married life, that it filled her imagination with a blissful, pitying pain to think that other women suffered.

The pity was sincere, and the bliss came from the knowledge of her security. She felt it wonderful to have such a sense of safety as that she experienced in gazing across the street at the girl's wistful face. It was like the overpowering thankfulness with which a man on a rock looks on while others drown. It wasn't callousness; it was only an appreciation of mercies. She was genuinely sorry for the girl, if the girl needed sorrow; but she didn't see what she could do to help her. It was well known that out in that life of New York—and of the world at large—there were tempests of passion in which lives were wrecked; but from them she herself was as surely protected by her husband's love as, in her warm and well-stored house, she was shielded from hunger and the storm....