The Legend of the Bleeding-heart 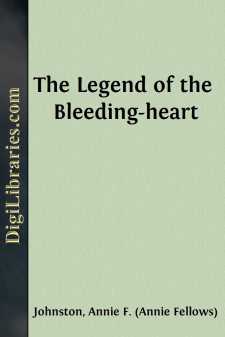 The Legend of the Bleeding-heart

In days of old, when all things in the Wood had speech, there lived within its depths a lone Flax-spinner. She was a bent old creature, and ill to look upon, but all the tongues of all the forest leaves were ever kept a-wagging with the story of her kindly deeds. And even to this day they sometimes whisper low among themselves (because they fain would hold in mind so sweet a tale) the story of her kindness to the little orphan, Olga.

'Twas no slight task the old Flax-spinner took upon herself, the day she brought the helpless child to share the shelter of her thatch. The Oak outside her door held up his arms in solemn protest.

"Thou dost but waste thyself," he said. "Thy benefits will be forgot, thy labours unrequited. For Youth is ever but another title for Ingratitude."

"Nay, friend," the old Flax-spinner said. "My little Olga will not be ungrateful and forgetful."

All hedged about with loving care, the orphan grew to gracious maidenhood, and felt no lack of father, mother, brother or sister. In every way the old Flax-spinner took their places. But many were the sacrifices that she made to keep her fed and warmly clad, and every time she went without herself that Olga might receive a greater share, Wiseacre Oak looked down and frowned and shook his head.

Then would the old dame hasten to her inner room, and there she pricked herself with her spindle, until a great red drop of her heart's blood fell into her trembling hand. With witchery of words she blew upon it, and rolled it in her palm, and muttering, turned and turned and turned it. And as the spell was laid upon it, it shrivelled into a tiny round ball like a seed, and she strung it on a thread where were many others like it, saying, "By this she will remember. She will not be ungrateful and forgetful."

So years went by, and Olga grew in goodness and in beauty, and helped the old Flax-spinner in her tasks as blithely and as willingly as if she were indeed her daughter. Every morning she brought water from the spring, gathered the wild fruits of the woods, and spread the linen on the grass to bleach. At such times would the bent old foster-mother hold herself erect, and call up to the Oak, "Dost see? Thou'rt wrong! Youth is not another title for Ingratitude."

"Thou hast not lived as long as I," would be the only answer.

One day as Olga was wandering by the spring, searching for watercresses, the young Prince of the castle rode by on his prancing charger. A snow-white plume waved in his hat, and a shining silver bugle hung from his shoulder, for he had been following the chase.

He was thirsty and tired, and asked for a drink, but there was no cup with which to dip the water from the spring. But Olga caught the drops as they bubbled out from the spring, holding them in the hollow of her beautiful white hands, and reaching up to where he sat, offered him the sparkling water. So gracefully was it done, that the Prince was charmed by her modest manner as well as her lovely face, and baring his head when he had slaked his thirst, he touched the white hands with his lips....