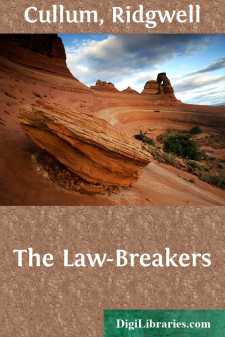 CHAPTER I WATCHING THE LINE

There was no shade anywhere. The terrible glare of the summer sun beat down upon the whole length of the wooden platform at Amberley. Hot as was the dry, bracing air, it was incomparable with the blistering intensity of heat reflected from the planking, which burned through to the soles of the feet of the uniformed man who paced its length, slowly, patiently.

This sunburnt, gray-eyed man, with his loose, broad shoulders, his powerful, easy-moving limbs, seemed quite indifferent to the irritating climatic conditions of the moment. Even the droning of the worrying mosquitoes had no power to disturb him. Like everything else unpleasant in this distant northwestern land, he accepted these things as they came, and brushed them aside for the more important affairs he was engaged upon.

He gazed out across the wide monotony of prairie with its undulating wavelets, a tawny green beneath the scorching summer sun. He was thinking deeply; perhaps dreaming, although dreaming had small enough place in his busy life. His lot was a stern fight against crime, and, in a land so vast, so new, where crime flourished upon virgin soil, it left him little time for the more pleasant avenues of thought.

Inspector Stanley Fyles came to a halt at the eastern end of the long platform. Miles of railroad track stretched away in a dead straight line toward the distant, shimmering horizon. For miles ahead the road was unbroken by a single moving object, and, after a long, keen survey, the man abruptly turned his back upon it.

In a moment he became aware of a hollow-chested man hurrying toward him. He was coming from the direction of the only building upon the platform—the railroad office, or, as it was grandiloquently called, the “booking hall.”

Fyles recognized the man as the railroad agent, Huntly, who controlled the affairs of his company in this half-fledged prairie town.

He came up in a flurry of unusual excitement.

“She’s past New Camp, inspector,” he cried. “Guess she’s in the Broken Hills, an’ gettin’ near White Point. I’d say she’d be along in an hour—sure.”

For once in his life Stanley Fyles’s patience gave way.

“It ain’t no use cussin’,” he protested, with a suggestion of malicious delight. “Y’see, she’s just a bum freight. Ain’t even a ‘through.’ I tell you, these sort have emptied a pepper box of gray around my head. Yes, sir, there’s more gray to my head by reason of their sort than a hired man could hoe out in half a year.”

“Twenty minutes ago you told me she’d be in in half an hour.”

There was resentment as well as distrust in the officer’s protest.

“Sure,” the man responded glibly. “That was accordin’ to schedule. Guess Ananias must have been the fellow who invented schedules for local freights.”

The toe of Fyles’s well-polished riding-boot tapped the superheated platform.

His gray eyes suddenly fixed and held the ironical eyes of the other.

“See here, Huntly,” he said at last, in that tone of quiet authority which never deserted him for long. “I can rely on that? There’s nothing to stop her by the way—now? Nothing at all?”

But the agent shook his head, and his eyes still shone with their ironical light.

“Cut it out, man,” broke in the officer sharply. “You are sure about the train? You know what you’re talking about?”

The agent grinned harder than ever.

“This is a prohibition territory——” he began.

But again Fyles cut him short. The man’s irrepressible love of fooling, half good-humored, half malicious, had gone far enough.

“Anyway you don’t usually get drunk before sundown, so I guess I’ll have to take your word for it.”

Then Inspector Fyles smiled back into the other’s face, which had abruptly taken on a look of resentment at the charge.

“I tell you what it is,” he went on. “You boys get mighty close to the wind swilling prohibited liquor. It’s against the spirit of the law—anyway.”

But the agent’s good humor warmed again under the officer’s admission of his difficulties....