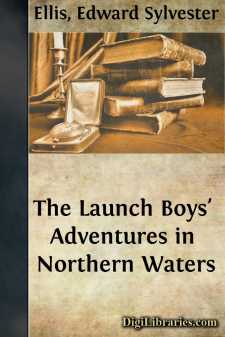 CHAPTER I A Proposal and an Acceptance

Alvin Landon and Chester Haynes were having a merry time in the home of Mike Murphy, when a servant knocked and made known that a caller was awaiting Alvin in the handsome bungalow belonging to his father. I have told you how the boys hurried thither, wondering who he could be, and how they were astonished to find him the “man in gray,” who had become strangely mixed up in their affairs during the preceding few days.

But Alvin was a young gentleman, and asked the stranger to resume his seat, as he and Chester set the example. They noticed that the visitor was without the handbag which had hitherto seemed a part of his personality. Self-possessed and vaguely smiling, he spoke in an easy, pleasant voice:

“Of course you are surprised to receive a call from me.” He addressed Alvin, who replied:

“I don’t deny it. Heretofore you have seemed more anxious to keep out of our way than to meet us.”

“I admit that it did have that look, but the cause exists no longer.”

This remark did not enlighten the youths. Chester for a time took no part in the conversation. He listened and studied the man while awaiting an explanation of what certainly had the appearance of a curious proceeding.

“I don’t understand what could have been the cause in the first place,” said Alvin, “nor why my friend and myself should have been of any interest at all to you.”

The other laughed lightly, as if the curt remark pleased him.

“I have no wish to play the mysterious; my name is Stockham Calvert.”

It was Alvin’s turn to smile, while Chester said meaningly:

“That tells us mighty little.”

“I am one of Pinkerton’s detectives.”

The listeners started. They had never dreamed of anything of this nature, and remained silent until he should say more.

“You are aware,” continued the mild spoken caller, “that there have been a number of post office robberies in the southern part of Maine during the last six months and even longer ago than that.”

“A professional detective doesn’t know his business when he proclaims his purpose to the world. He does so in the story books, but would be a fool to be so imprudent in actual life. Consequently you will think it strange for me to take you into my confidence.”

“I don’t doubt you have an explanation to give,” suggested Alvin.

“I have and it is this. Without any purpose or thought on your part you have become mixed up in the business. The other night you gave me great help, though the fact never entered your minds at the time. You located their boat in a small inlet at the southern extremity of Barter Island.”

At this point Chester Haynes asked his first question:

“Surely I did not follow you thither without learning all you did. Your conversation on the steamer gave me the information I wished. I did not expect you to succeed as well as you did.”