The Last Voyage to India and Australia, in the 'Sunbeam' 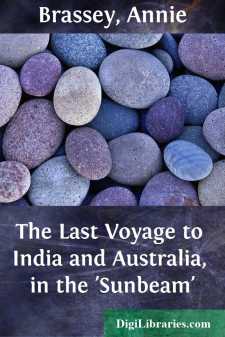 In giving to the reading world these pages of the last Journal of one of the most popular writers of our day, no apology can be needed, and but little explanation.

A word had better perhaps be said, and said here, as to my share in its composition. It is now twelve years ago since my friend—then Mrs. Brassey—asked my advice and assistance in arranging the Diary she had kept during the eleven months' cruise of the 'Sunbeam.' This assistance I gladly gave, and she and I worked together, chiefly at reducing the mass of information gathered during the voyage. I often felt it hard to have to do away with interesting and amusing matter in order to reduce the book even to the size in which it appeared. It was a very pleasant and easy task, and I think the only difference of opinion which ever arose between us was as to the intrinsic merit of the manuscript. No one could have been more diffident than the writer of those charming pages; and it needed all the encouragement which both I and her friend and publisher, Mr. T. Norton Longman, could offer, to induce her to use many of the simple little details of her life, literally 'on the ocean wave.'

The success of the 'Voyage of the "Sunbeam"' need not be dwelt on here; it fully justified our opinion, surprising its writer more than any one else by its sudden and yet lasting popularity. Other works, also well received and well known to the public, followed during the next few years, with which I had nothing to do. This last Journal now comes before Lady Brassey's world-wide public, invested with a pathos and sadness all its own.

I venture to think that no one can read these pages without admiration and regret; admiration for the courage which sustained the writer amid the weakness of failing health, and regret that the story of a life so unselfish and so devoted to the welfare of others should have ended so soon.

On his return home, in December 1887, from this last cruise, Lord Brassey placed in my hands his wife's journals and manuscript notes, knowing that they would be reverently and tenderly dealt with, and believing that, on account of my previous experience with the 'Voyage of the "Sunbeam,"' I should understand better than any one else the writer's wishes.

My task has been a sad and in some respects a difficult one. Not only do I keenly miss the bright intelligence which on a former occasion made every obscure point clear to me directly, but the notes themselves are necessarily very fragmentary in places. It astonishes me that any diary at all should have been kept amid the enthusiasm which greeted the arrival and departure of the 'Sunbeam' at every port, the hurry and confusion of constant travelling, and, saddest of all, the evidences of daily increasing weakness. Great also has been my admiration for the indomitable spirit which lifted the frail body above and beyond all considerations of self. I need not here call attention to Lady Brassey's devotion to the cause of suffering shown in her unceasing efforts to establish branches of the St. John Ambulance Association all over the world. It will be seen that the last words of the Journal refer to this subject, so near the writer's heart.

I have thought it best to allow the mere rough outline diary of the first part of the Indian journey to appear exactly as it stands, instead of attempting to enlarge it, which could have been done from Lord Brassey's notes....